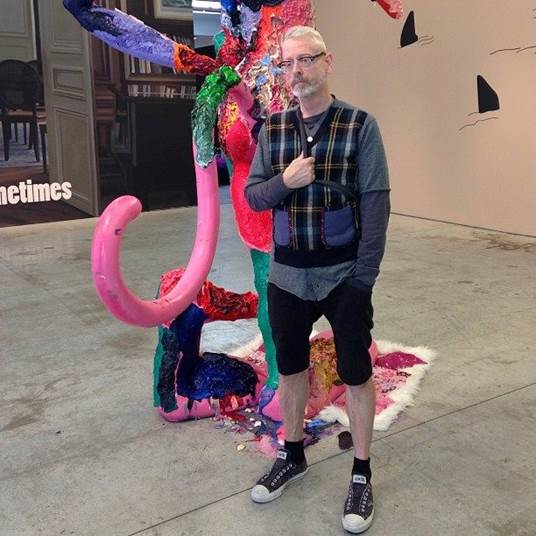 Fashion is full of fleeting trends and one-season-only It bags, but longevity can indeed exist in this biz! To wit: this week’s star of The Assistant Files. Anna Sui‘s personal assistant, Thomas Miller, has been an employee at the label for 26 years. From the designer’s first fashion show to his fashion week duties, this long-time right hand man has quite a few stories to share…

What were you doing before you arrived at Anna Sui?
Not that many things: I’ve worked here for 26 years!

Wow! How did you find Anna Sui all those years ago?
When I graduated from UCLA in 1980, where I studied costume design, I moved to New York. For a while, I took a few classes at Parsons and FIT on technical topics, like sewing. At FIT, if you took just one class, you could use their job placement board. It was literally a bulletin board with job listings on it, and I saw a job with Anna listed there.

What was the company like when you started?
When I started working for Anna in 1989, I was only the third employee. We worked out of her apartment!

Were you originally hired as her assistant?
When I first started, I was helping with production. Because it was such a small company at that time, everybody had to do everything. Aside from me, there was a production manager, and a woman that cut all the samples by hand. When it came to shipping, even Anna was putting boxes together. After Anna did her first fashion show in fall 1991, the company got much bigger and Anna realized she needed to hire more people. She also realized that she needed somebody to help just her, so in 1992 she made me her assistant.

What was that first runway show like?
Anna is very good friends with Steven Meisel and they had gone to Paris Fashion Week the season before her first show. They went to the Jean Paul Gaultier show with Madonna, who was wearing one of Anna’s dresses. Anna thought, “Well, if she’s wearing my dresses, that gives me the confidence to do a show, because Madonna could choose anything to wear.” All of Anna’s friends helped out with that first show, like Paul Cavaco, one of the founders of KCD, Garren, who did the hair, and Francois Nars, who did the makeup. Anna was also friends with all the top models of the time, like Naomi [Campbell], Christy [Turlington], and Linda [Evangelista]. They all got together and urged her to do that first show. All those top models begged their other model friends to do Anna’s show, and the rest is history.

How has the company changed since you started?
The thing about Anna is that this company is all her. She’s the sole owner here, so nothing’s changed that much; it’s just gotten bigger. Anna does everything the same way she’s always done it, it’s just on a different scale.

What are your assistant duties comprised of?
Everybody sort of relies on me when they need to get in touch with Anna. If they need to ask her opinion, they go through me a lot of the time. Anna has a lot of side projects and personal appearances that I coordinate. She always asks me to figure things out or solve problems at the company, but I really don’t do things that a normal personal assistant would do. For all the fashion shows, I correspond with the artists we work with for the T-shirts, invitation, and set.

Are there certain tasks you look forward to doing during Fashion Week?
We’re all just focused on getting our jobs done! Before the show I write an essay describing the collection which goes into the show notes, and I enjoy doing that.

Does Anna have any input about the show notes?
I usually know all along what the collection is all about, but I like to hear what Anna’s saying, since things shift and change during the development of a collection. And with the styling, things might totally change. Right before the show, when important editors come and preview the collection, I’ll always sit in, so I can listen. And when we’re alone, I do ask Anna if there’s something specific she wants to say or would rather not say.

What’s been your most memorable day on the job?
When Anna won her first CFDA Award in 1992, she paid for all of [her staff] to attend. We were a much smaller group then, of course, but she mentioned all of our names in her speech. I found that very moving.

How would you describe your relationship with Anna?
We’re very close, obviously. But she’s not one of those people who needs her assistants on the weekend. There are definitely boundaries that she doesn’t overstep. Sometimes we will attend events socially together; we went to see [the band] Phoenix together and we’ve gone to see Kabuki.

What was it like helping Anna with her book, Anna Sui?
I helped out with the research and with clearing all the photographsI corresponded with every photographer and agent we wanted to include. I was definitely helpful because I’ve been to every show and I wrote all the essays in the show notes! I would also fill in the author, Andrew Bolton, about details I found newsworthy or quirky.

Did you enjoy revisiting old moments and collections?
Totally!

Do you have a favorite collection from over the years?
I liked Spring 2007, the pirate collection. I think it really referred to my youth in the ‘80s and the period when I moved to New York. It was kind of Mudd Club-inspired, although I probably only went there twice before they closed it. That was how girls dressed there; that’s the way I like girls to look.

Mr. Thomas Miller is an INSPIRATION in every sense of the word. We at the High School of Fashion Industries are grateful for the opportunities that Anna Sui and Thomas offers our students.
Love always 🙂
Belinda