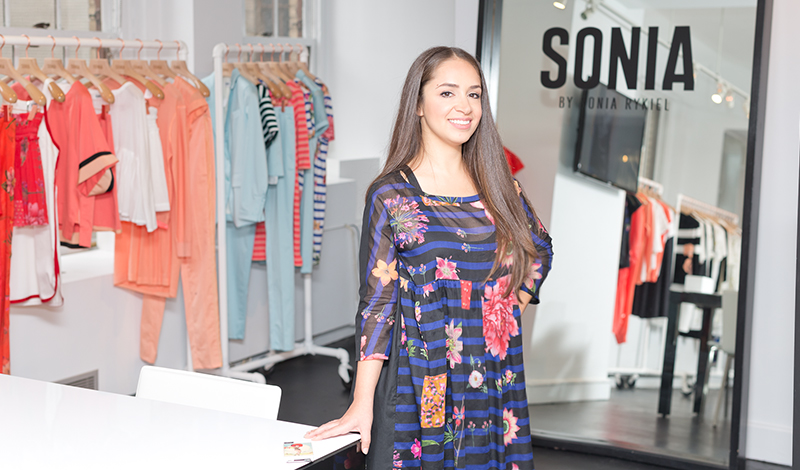 Tucked away in a little office above 57th Street is a little taste of Paris. It’s the New York outpost of Sonia Rykiel, where the iconic designer’s granddaughter Lola Rykiel runs the show. As director of communications, she and her assistant, Veronica Vera, are in constant communication with the maison‘s team in France. The duo has transcended the traditional boss and assistant role: Through various trips across the Atlantic, a new artistic director for the brand, and shipping samples internationally, the two have become more like friends. Rykiel even popped by at the end of the interview to add in a few choice words about her trusty righthand gal.

How did you end up in New York, Veronica?
I was born in Connecticut, but we bounced around to Illinois, Mexico, and Canada while I was growing up. I went to college in Syracuse and I studied fashion design there for four years. I started my Master’s degree in communications at Syracuse University’s Newhouse school, but I decided to move to the city and go to FIT instead. At that time I got an internship at Edite Atelier to do design. We did dresses for people like Jason Wu. They also had a showroom component, so I was working there for a while in their PR department as well.

Did you always want to be a fashion designer?
I always wanted to work in fashion, and I was always really artistic. Both of my godparents are artists, so I was always drawing in their studio, but I was also really into creative writing, so I wanted to do both. I did have a clothing line once called Ixchel, which was around for just a couple of seasons.

How did you end up at Sonia Rykiel?
At the same time that I was working at the other showroom, I was also freelancing for Sonia Rykiel for a number of years during their market days. Four years ago, when Lola moved to New York, she needed an assistant. I always wanted to work for Sonia Rykiel, and this was a great opportunity that just came about.

What was the interview process like?
We met at Starbucks first, and then I had a formal interview after that. But it took a little while to get a position set up for me; it needed to be created within the company.

What’s an average day like for you here?
Our office opens at 9:30 a.m. First we deal with emails from the Paris office, because they’re a few hours ahead of us. There are always things to get back to them about, or samples that need to be sent out. If anything needs to be shipped from Paris to New York, we get it in Worldnet. I usually deal with that first thing in the morning. Once that’s wrapped up, I meet with Lola and we have a debrief of what we have to do for the day.

Is speaking French vital to work here?
We only have two native French speakers in our office: Lola and an assistant on the commercial side. My intern is a native French speaker, which helps a lot because I’m always like “Help me! I need this decoded!” I took French for a number of years in college and in high school, so I should be able to speak it, but I don’t! I do understand a lot of it, though.

How often do you travel to Paris?
We go twice a year for the Sonia Rykiel show.

How does your work change when you travel there?
We work remotely and in the office, so we’re bouncing between the two a lot. We’re reconfirming editors’ attendance, we’re scheduling re-sees, I’m scheduling lunches and dinners, making sure that everything is running smoothly, all while getting Lola’s schedule together. We have two presentations when we’re in Paris; Sonia by Sonia Rykiel first and then Sonia Rykiel. While this is all going on, we still have things going on in the New York office. So it’s certainly not a vacation, but it’s still a lot of fun.

This year must have been so exciting with a new artistic director, Julie de Libran, on board.
It was incredible, you could feel the energy. Just being part of it was such a beautiful thing. The brand really has this idea of being really creative and intellectual. You could really feel that spirit again this season, especially since the show was in this very intimate setting at the boutique.

What was your role at the show?
I was helping seat editors, making sure that there were no issues on our block, and ensuring that everything was going fluidly. I was also making sure the journalists were getting backstage. It was just craziness.

Where else have you traveled for work?
We’ve been to Hong Kong, we were in Toronto recently, and Mexico City.

Do you go everywhere that Lola goes for work?
Not always, but we try.

Have you ever met Sonia?
I haven’t. But the first time Lola went back to Paris after I started working here, she brought me a really beautiful notecard drawing that she did for me, with my name on it.
Lola: She didn’t spell your name right, though! My mother and my grandmother always think Veronica is with a ‘K.’ I don’t know why!

Veronica, do you identify more with Sonia Rykiel or Sonia by Sonia Rykiel?
Veronica: Clothing-wise, I wear Sonia by Sonia Rykiel more because it’s more practical for my lifestyle. It fits me well and it’s really fun and girly. But as far as brand identity goes, I really feel strongly towards Sonia Rykiel, because I really like this idea of an intellectual and strong woman who’s going to art museums. That really resonates with me.
Lola: Veronica is a true feminist. She’s very intellectual. She could have been Simone de Beauvoir. She fits so well here.

What’s it like working together?
Veronica: We have a really great relationship. I think that us working together was meant to be. We have this relationship where if one of us doesn’t have something, the other one has it.
Lola: She’s amazing. She’s not only my assistant, but she’s a true friend. It’s was hard when I came here from Paris and had to restart my life. After a few months I found Veronica, or she found me. Not only did we start to build the office, but I got a really good friend out of it, too. She started off as an assistant, but today I consider us as a team.

It does seem like fate that you two work together.
Lola: Well, once we had a palm reader come to our press preview. We had him do our star sign. He told us we have two totally opposite charts, but everything on there was complimentary. Everything Veronica doesn’t have, I have. It makes sense why we have such a good balance.
Veronica: It was literally in the stars!

Where’s your next step? Where do you see yourself in five years?
Veronica: I see myself here, honestly. I see myself growing here and maybe doing more creative things.
Lola: She’s not going anywhere!