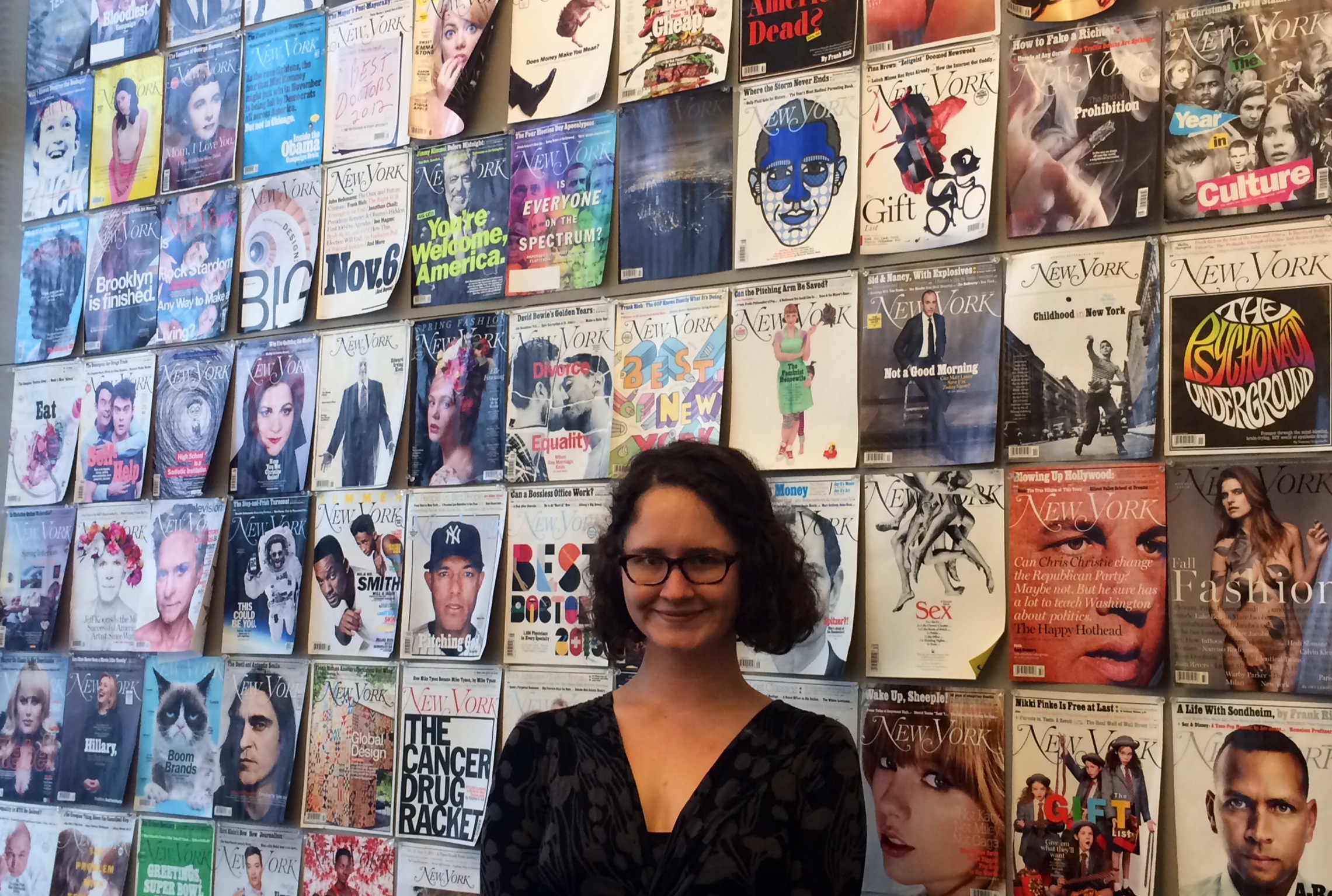 What’s New York EIC Adam Moss like as a boss? Just ask Kat Ward, who’s been his assistant for the past five years. This Johns Hopkins grad joined the mag in 2008 as an intern, snagging a freelance gig at the title’s bridal book before landing the role of Moss’ right-hand gal. From cutthroat softball games to ASME celebration bashes at The Spotted Pig, life at the now-biweekly local bible sounds quite interesting on and off duty…
BY ALEXANDRA ILYASHOV

What did you do pre-New York?
I studied creative writing at Johns Hopkins, and while I was in school, I did a few internships and worked at the Johns Hopkins University Press. After graduating, I moved home to Boston and worked for a textbook company, which was boring.

So what brought you to NYC?
I applied for an internship at New York, got it, and moved here in 2008…just about time for everything to crater and freak out. I thought, “Oh God, I’ll have to move back home again!” I interned for eight months or so—it started as a summer position, and I sort of just hung around. Then, I freelanced for our Weddings issue. I was hanging around the office like, “So, you hiring people?” I lucked out that the assistant who was here before me left right as I was finishing up my internship, in 2009.

How was your interview with Adam?
Scary. He’s not a very scary person, but job interviews are baseline stressful. It worked out, I guess. It was a lot less structured than I thought. I had subbed in for the former assistant, Emma, when she was on vacation, so Adam sort of knew me. Emma spent a couple days going over how to do the calendar, how to deal with the sheer amount of people that call to complain, expenses. Insane stuff like that.

Why so many complainers?
Anyone who asks for Adam gets transferred to my line. People mostly want to argue about something in the magazine, or say something “I did not enjoy this week’s sex column!” When I first started, I was terrified of saying something wrong; people would talk to me for a very long time.

What’s it like when an issue is shipping?
Thursdays used to go anywhere from 8 to 11 p.m., depending on the issue close. Now that we’re biweekly, things are spaced out over two weeks, and there are fewer late nights. But everyone’s always thinking about what’s coming up next, and the issues are thicker.

So you’ve earned back half of your Thursday nights!
Oh, yeah. My friends are still adjusting. They’re like, “Why are you texting me at 8 p.m. to hang out? What’s going on?”

When New York went biweekly, there was some industry fear about the future of print. Did you feel that in the office?
It wasn’t fear as much as a little sadness and nostalgia. The nostalgia was coupled with a feeling of, “Now we have to make a new thing, and make it awesome.”

Is there much of an assistant culture at the mag?
Print is small-ish, and I don’t think anyone is officially an assistant [in digital]. There are some assistants in the design and photo departments.

Do you guys get together?
Not usually, because we’re all running around frantically! Except at softball, the one thing that people you never see regularly come out for.

What’s the scoop on New York’s softball situation?
We’re not a part of the official media league; they’re very scary. They’re terrifying, in all seriousness! We just schedule other games with other organizations, like DC Comics, High Times, The New York Times Magazine, Gawker, The Paris Review, The Daily Show, and Huffington Post. Literally, anyone who’s in New York and has a team.

Which teams are particularly athletically gifted?
High Times beats us all the time, and Vanity Fair is always a tough game.

Gotcha. So, is Adam pretty demanding?
He’s extremely laidback, and very self-sufficient. I’ve heard other people’s horror stories. I make restaurant reservations sometimes, or call in tickets at a theatre, but it always happens during office day. He’s very cool. If I can get a reservation for a specific place, I’ll get it—if not, he’ll have another restaurant to try. Nothing’s a matter of life or death.

Do you ever fetch Adam’s lunch?
No, but sometimes I’ll get Adam coffee if he’s really slammed.

What’s his java order?
Regular coffee and some milk. Nothing fancy.

What do you eat for lunch?
Usually I’m at my desk; if Adam goes out for lunch, I’ll sneak outside for a bagel. There’s a really good falafel place not too far away. Otherwise, it’s either salad or French fries, because I’m terribly unhealthy. The cafeteria in our building has really good fries.

How does Adam get to work?
He rides his Vespa when it’s nice out. Otherwise, it’s just the subway.

Any good overheards from sitting outside Adam’s office?
Adam and [executive editor] John Homans sit right next to each other, and my favorite thing is to hear them talking, usually about whatever story Homan’s started editing.

What does Adam subscribe to?
He has a whole slew: Esquire, GQ, Vanity Fair, The New Yorker, Businessweek, and The Atlantic all go home with him. I don’t know when our editors do all of their reading; they’re a little busy with their day jobs! They have extensive knowledge of what’s going on, who’s reporting, and what writers they’re interested in.

Do you work with the interns much?
I hire and supervise the print interns. They’re eager, smart people who really want to work in journalism. We encourage our interns to do both print and digital. If they’re bored, I’ll tell them to ask the digital people if there’s anything to do, since they’re constantly in need of content.

What excites you more: print or digital?
Print. It’s nice and shiny, you can hold it—and you can send your byline to your mother.

What’s ASME season like at New York?
It’s always exciting, and a little nervewracking to see how we’ll do. It’s nice to win, when that happens. We go out after the ceremony—this year, we did the Spotted Pig. Staffers that “watched” the Awards on Twitter or at home will meet up with editors who were there.

Where do the Ellies live in the office?
They get stashed somewhere.

Do you have to clean them?
No. Actually, I don’t know who cleans them…

What’s the office dress code?
It’s pretty casual. I’m wearing a dress today only because I have to do laundry and wash my jeans. Some people are pretty sharp-looking, but it’s not a requirement. Jeans are the standard.

Ever gotten starstruck over a sighting in the office?
A couple years ago, we did a big package about NYC’s best neighborhood to live in. It was huge and super work-intensive. They brought in Nate Silver to mastermind how we were going to put the information together. I was like, “I get to cull data for Nate Silver?!” That’s really nerdy, isn’t it…

What’s your dream job these days?
I swing back and forth between wanting to write and wanting to edit. I’m on the edit swing right now—writing requires a lot of attention and focus.

When you were a kid, what was your dream gig?
I thought I was going to be a doctor, so I was initially pre-med when I started college. I thought my creative writing major sounded just liberal art-y enough to be interesting on a med school application. Then I took science classes and realized everyone else in the program was way more dedicated and intense. I didn’t pay attention to magazines when I was younger. It wasn’t until halfway through college that I realized magazines were a viable career.

Ever considered revisiting your medical aspirations?
No. I know people getting Ph.D’s and doing residencies these days—it sounds so not fun. I want to hear their stories and I’m glad I’ll know a topnotch doctor in the future, but I’m glad I’m not in that field.