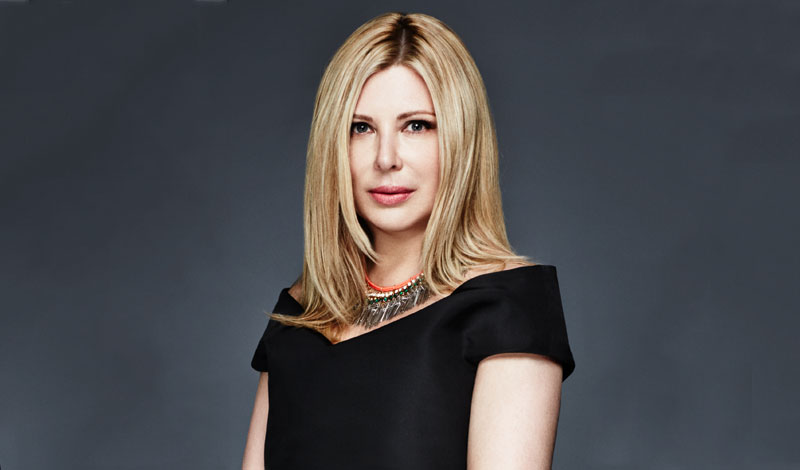 Áslaug Magnúsdottír changed the e-commerce landscape and the traditional designer trunk show setup when she launched Moda Operandi along with Lauren Santo Domingo in 2011, allowing women to buy clothes straight off the runway. Now the Icelandic entrepreneur, who left Moda Operandi last May, has just launched her latest revolutionary e-tail experience, Tinker Tailor. The site is bringing the allure of the customization experience previously relegated to the couture realms to traditional ready-to-wear. Now you can make a Rodarte or Marchesa dress fit just to your specifications. Long or short? Embellishments or no embellishments? Solids or prints? No problem. Plus, there will be an array of design options under the Tinker Tailor brand that will allow you to design your own pieces. Did we mention Magnúsdottír also happens to be a Fulbright scholar, has an MBA from Harvard, and her masters in law from Duke? We sat down with her in Tinker Tailor’s midtown HQ for a glimpse into how she’s changing the fashion business, one idea at a time.
BY PAIGE REDDINGER

How long was this in the works for you?
I started working on this June of last year. I had thought about it a little bit before, but I was at Moda Operandi until May. When I left, I took a month off , deciding whether I wanted to go to a brand or not. I decided not to: I love starting companies, and I noticed this big trend about womens’ reactions to customization. I kept traveling to the Middle East and I was hearing about how they all wanted unique things. They don’t want other people to have it. In a way, that brings it back to an old school couture experience where there’s a bit of collaboration between the designer and the woman, but most girls can’t afford couture. So to still have standard sizes while allowing customizations in the design allows it to be done at an affordable price.

Where did you take your time off?
New York. It just gave me some time to rest and my husband couldn’t travel at the time, so we just stayed here. We launched two weeks ago. I think that it’s  fast in general, but also because of the complexity of the site; what we are doing that has never been done before, so all of the elements were very unique. There wasn’t a proven way to do them.

Who was the first designer you approached about customization and what did they think?
The first designer I approached was Ostwald Helgason. The brand will be going on the site in June; they loved it! Most designers really embrace the idea, because they get to see what the customers like, which gives them a little more insight. They also understand this old-school couture relationship to their customers. A lot of them told me they’re already getting more and more requests for customization.

Will the accessories also be customizable?
We sell accessories, but we aren’t customizing them yet. I think that we will be. One shoe designer said to me, “I have been complaining that NIKE ID can have this technology and I can’t!”  They want to be able to provide that uniqueness and self-expression to their customers, and nobody has given them that platform before.

How customizable are items on the site currently?
There are lot of options, like 30 standard dress silhouettes, broken into the components of the dress. So when you have mixing and matching things with different fabrics and embellishments, you can end up with hundreds of thousands of different options, but for us it’s as simple as, ‘OK, we have 40 different bodices that you can choose from and have them made in the fabrics.’ As soon as a customer places the order we hit print and the pattern gets manufactured. We have manufacturers here and in L.A., so we can wrap up pretty fast, but we don’t expect to get a thousand orders of something in the next month.

What’s the customization process like?
We call the Tinker Tailor branded stuff ‘creation’, so for me that was very much about the fact that I am not putting out a brand. Instead, I’m providing the user with a tool to create her own dream dress. We have different degrees of options. You can just pick one of our standard silhouettes, and for some people, that’s enough of a process. Others have more specific things in mind so that gives more flexibility. You might say, “I really love a dress with a neck up to here but I want sleeves and a tight skirt, because that is what suits my body best or that is how I like to dress” or maybe you want the long skirt because you don’t like to show your legs.

What do you offer in terms of fabrics?
We offer a lot of options for fabrics and you can have a different fabric for the top, bottom, and sleeves; the system knows which fabrics are compatible with which part of the dress. It also knows what’s compatible with the fabric you chose for the bodice and how it goes with the skirts, because the weights of the fabrics are important for the construction. For the bodices, we have a lot of solids, but we also have a lot of prints that have been made specifically for us. We’ve partnered with print designers like Joe Duke, but we also have designers like Yazbukey, who’s  made some quirky, fun prints for us, and John Brevard, who makes jewelry, has made for the first time ever a pattern for us, which is really cool and edgy.

Who did you collaborate with first on fabrics?
One of the first people that we partnered with is Susan Brown. I met her, because she is the sister-in-law of Pauline Brown, who is the chairwoman of LVMH North America. We asked her to do a city theme or destination theme for us, so she made these various paintings from London, Japan, St. Tropez and then we had a print designer take these paintings and translate them into prints. I want to continue to collaborate with artists that make unique prints. We are a seasonless business, so these prints will not just be on the site for two months and go away. People a year from now can still order that Susan Brown print; maybe it will be a skirt  now, and next year they want a dress in the same print. One other thing that a lot of people like is that once they find a shape of a skirt that they love, they want to be able to order it in a million different colors, so that is something that we are able to do.

What is the delivery timeframe like?
For the Tinker Tailor pieces it’s about six weeks. But for the designer pieces it depends; some are doing in-house production, so it can range anywhere from two months to five months.

Have you made anything for yourself yet?
Yes, of course! I made an Ostwald dress in a John Brevard print.

Are the designer label pieces all exclusive to the site?
That’s the strategy for now. Everything that you are buying, in terms of ready-to-wear, from the site is not only customizable, but it is exclusive to us.

Is it hard for the designers to make their pieces customizable?
It depends on how they manage their production. The way that we work with some of them is that are runway styles that they carve out as exclusive or there are styles from the runway that they adjust and make exclusive to us by offering it in colors that weren’t available before. For example, Marchesa offered a dress that was previously only long in a short version with different color options. Also, some designers like working with their historical best-selling silhouettes, but like to update them. Then, there are others that want to create something completely unique and test things with this different customer base.

Will ever do menswear?
There are no plans to do menswear, but I keep being asked that question…so never say never! Accessories are definitely what’s next on my radar; then, growing the bridal part.

Do you foresee bridal being one of the biggest categories?
I think that it can be a very big category because when someone is getting married they really want something special that is completely unique. I envision that to be a big important part of the business. The ready-to-wear designers we worked with that do bridal  as well were like, “Please do our bridal too!”

Have there been any popular designs yet?
The Joe Duke fabric with the roses  has been very popular, as has the Joe Duke lilacs. The John Brevard prints has been doing very well. In terms of the silhouettes, the Sudie dress is very popular.

How many designers do you have onboard?
We’ve signed up 80. We don’t want to overcrowd the site, which means that we are just launching about three a week. We are gradually introducing them to give them good exposure on the site.

How hard was it to get investors?
I did it a little differently this time around, but step one is to follow a business plan. It’s important to have something to pitch to investors. This time around, I raised the money all from private individuals. At Moda Operandi we went straight to venture capitalists. I don’t think that one way is better than the other, but when you are investing with individuals you can keep control for longer. Statistically it’s harder for women to start a venture capital than men, but I think that it’s become a lot easier in the past few years. There have been a lot of female entrepreneurial success stories that have helped pave the way for other women.

How many people are on your team right now?
There are 15 employees full time. I think that understanding the gaps in your skill set and how your are going to fill them is really key as well, because investors are really investing in the people more than anything else, but of course they have to like the idea.

Is there going to be a fashion director role?
I don’t necessarily foresee having that. We have a couple of consultants and advisors that fill that role like Yasmin Sewell, who’s one of our advisor board members, and Melanie Ward has been very creative with the products from her design background. But because the designs are up to the user, I don’t just want to put one direction out there. I really want different women from different parts of the world with different aesthetics to be able to come onto the site and create something that they want.

Tell us about The Thread, the editorial component.
I thought that was so critical, because the concept is something new. Some people are comfortable with creating their own choices, but some people want a little bit more guidance like seeing what Yasmin Sewell likes for instance. We have interviews with the Marchesa and Rodarte designers, too, so it gives a little more insight behind the scenes. Also, there will be influencers that are either selecting their picks from the designers or using the Tinker Tailor tool to create looks that we feature.