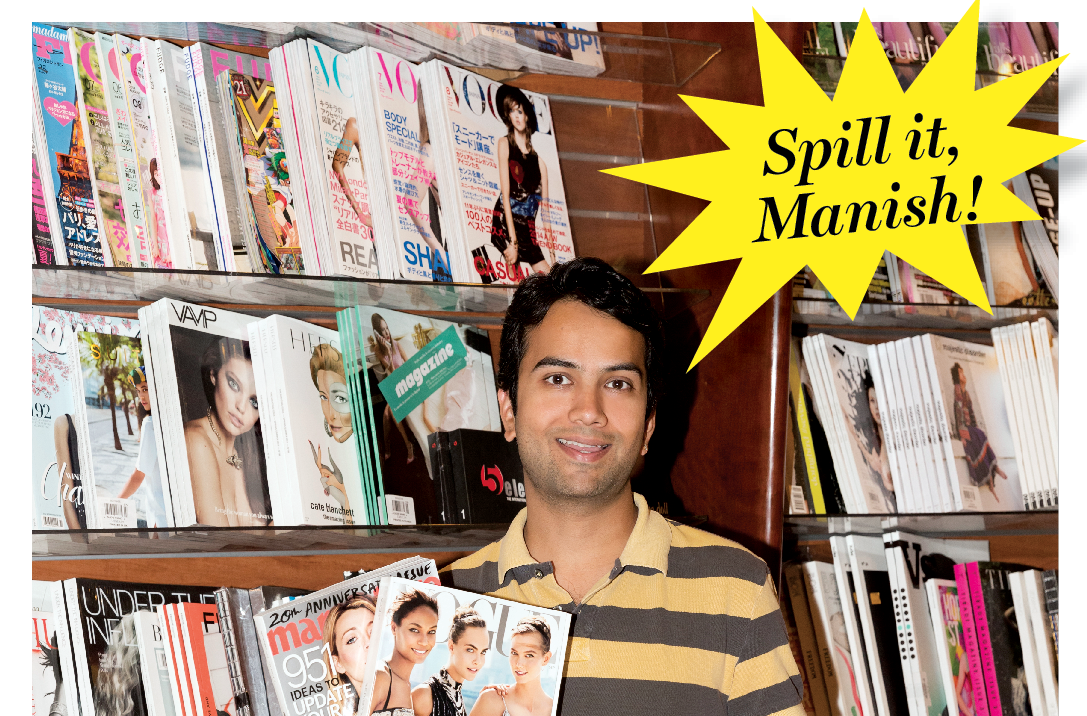 ABC numbers aside, how are your glossies really faring? As always, our trusty newsstand expert Manish Golchha weighs in from behind the counter of 37th Street’s premiere fashion district resource, Magazine Café. What’s selling? What’s flopping? Answers ahead.
BY EDDIE ROCHE

What’s new with your business?
A lot of changes are happening. The biggest story is that the second-largest distributor in the United States filed for bankruptcy.

No bueno! How does that affect you?
Today, we had 120 copies of Vogue, and now we’re almost sold out, but we’re not sure when the next copies will come in. That’s a problem! If customers get frustrated, they stop coming to the newsstand!

Any changes in magazines since last September?
Porter came along and it has been doing well, but the response has faded a little bit. There was a craze with the first issue. They’ve done a phenomenal job—all the issues also seem to be getting bigger and bigger!

Does anybody ever come in looking for the September issues to use as a weapon?
Not so far! Maybe they could use them to work out.

A lot of unknown faces are appearing on the covers. We call them models. How are they selling?
Fine. Anything that is controversial or celebrity-oriented still seems to sell well. But I like models.

Do you know the girls on the cover of Vogue?
I’ve seen the girl in the middle.

Do you know the girl on the cover of Vanity Fair?
Nope! I’ve been out of the scene. I’m buying a house!

Excuse us. What covers impressed you lately?
The August issue of Paris Vogue has a lot of colors and textures. I like that a lot. It’s one of our best sellers. Vogue UK and Vogue Italia also do well. The new addition has been Vogue Brazil, which has been doing very well.

Let’s talk about Cosmo! Reasonable price, at $3.99.
Our customers in the fashion district don’t care about the price if they’re getting a quality product.

What’s your favorite Cosmo coverline this month?
“You’ve Got Jail: From Grad Student to Inmate.”

Who has the best paper quality?
Love! If you remember, Love and Pop were released around the same time, and Love has grown leaps and bounds, but Pop is fading away a little bit.

How’s Soap Opera Digest doing these days?
We sell one or two copies to women who look like they spend a lot of time as couch potatoes.

Who is on the cover of Industrie?
A famous actress, or maybe the editor of Vogue?

What are your best sellers?
W has had a very good year for us.

If you were an editor, who would you put on your cover?
I’d start with Rihanna! She’s a good thing. We sold a ton of Lui when she was on the cover. Do you know about Lui? It’s like the French Playboy. It’s racy, but really good.

Do you ever have customers who spend a little too much time looking at the dirty magazines?
Yes! We also have an Internet café, and there are guys doing all kinds of crazy things. I saw one guy’s screen and he was looking for escorts. A couple of days later, the computer had a virus and wouldn’t work. But we let them have fun, as long as they don’t take their pants off.

Which magazines do you read?
Fantastic Man, GQ UK…I like quality European magazines.

What’s your profit?
About 25 percent.

Who are you wearing today?
A Hugo Boss shirt, Replay jeans, and Cole Haan shoes.

Fancy. Business must be good!
I have no complaints!