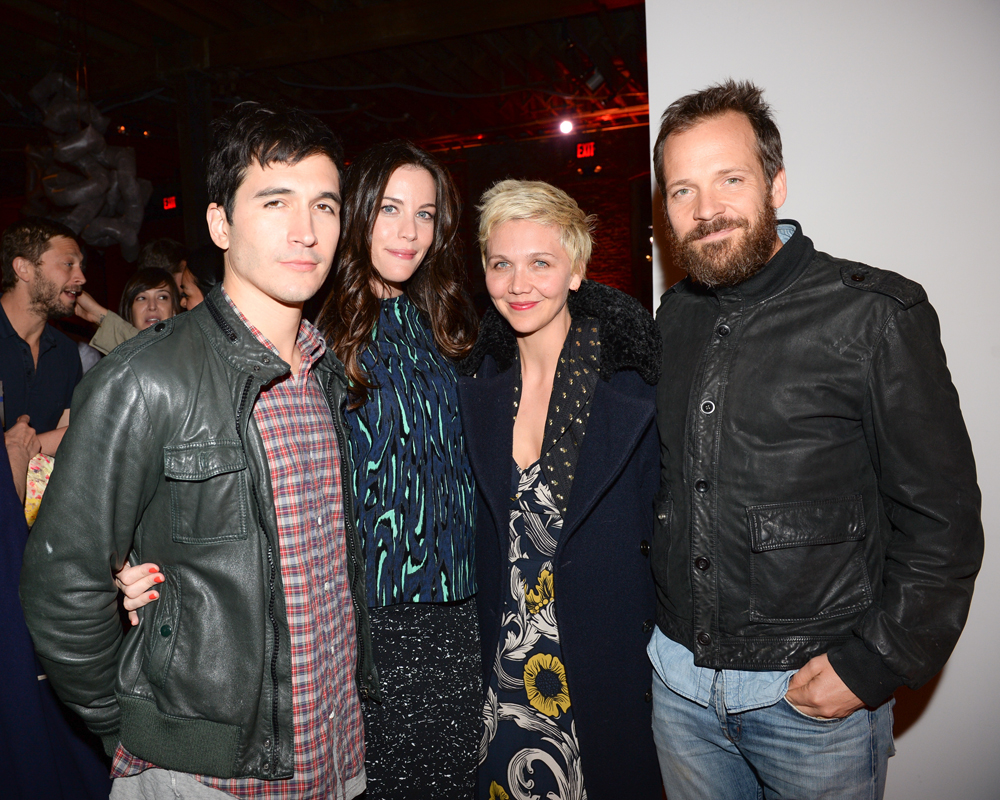 (NEW YORK) Felicitous weather, a beautifully renovated venue, and fashionable friends proved to be the perfect combination for last night’s Village Fête fundraiser, hosted by Pioneer Works, Brooklyn’s latest culture incubator. Founded by contemporary artist Dustin Yellin, Pioneer Works resides in a 24,000 square foot former storage warehouse in the secluded waterfront neighborhood of Red Hook. A long-held dream come to fruition, Pioneer Works unites creativity between the arts and sciences, complete with in-house recording studios, laboratories, and resident artist studios. The immense space and adjacent gardens were teeming with artists of every sort and a roster of fashionable friends helped make the exceptional turn out possible. As for the event’s co-chairs, it’s a pretty chic bunch: Lauren andAndres Santo Domingo, Proenza Schouler’s Jack McCollough and Lazaro Hernandez, Maggie Gyllenhaal and Peter Sarsgaard, Bob Colacello, Sydie Lansing, and Liv Tyler. Apparently, Tyler has known Yellin since their formidable teenage years in New York. “I love him tremendously,” Tyler told The Daily of Yellin. “It’s been amazing to have a friend who’ve I’ve known all my life, to watch him have this crazy insane idea and then really do it!”

The party began with a sunset ride courtesy of New York Water Taxi, which ferried Manhattanites across the East River. Guests were then led in celebratory parade to the nearby Pioneer Works. The crowd entered though the stone pebble-covered garden, which later was the backdrop for some quality time around the fire pit, amid the romantic glow of twinkling lights, with views of the city skyline. A live performance by Ariel Pink kicked off the in-house festivities, followed by live sets by DJ’s Mike D, MGMT, and Chances With Wolves avec a pristine dance floor begging to be broken in. Most guests were happy to oblige, dancing well into the evening. Works by various artists donated for the 9 p.m. silent auction were displayed all over the venue.
Guests could peruse the pieces up for grabs and engage in bidding wars for covetable works on wall-mounted iPads that displayed all the specifics plus a countdown to final bids. Among those browsing the wares and adding to their shopping lists: the likes of Coco Brandolini, Karen Elson, Mariska Hargitay, Naomi Watts, Jake Gyllenhaal, Jemima Kirke, Liz Goldwyn, Cecilia Dean, Jeffrey Deitch, Harley Viera Newton, Hannah Bronfman, Kate Young, and Derek Blasberg, who took home a brand new Yellin original to add to his collection. Artists like José Parlá, André Saraiva, and Mickalene Thomas mingled with designers Misha Nonoo, Tabitha Simmons, and David Yurman. Guests continued to trickle in throughout the evening and were all smiles while imbibing on Absolut cocktails and indulging in El Salvadorian fare courtesy of the Solber Pupusas food truck parked outside. The vibe was eclectic and carefree; like a group of old friends who shared memories of creative endeavors and spirited celebrations aplenty. At the end of the evening, the Village Fête had racked up over $750,000 for the novel non-profit organization. You know what they say: it takes a village to make a fête!
JULIANNE ZIGOS

The Unofficial Met Ball Pre-Party: The Opening Of The Anna Wintour Costume Center

May The 4th Be With You, Rodarte Style