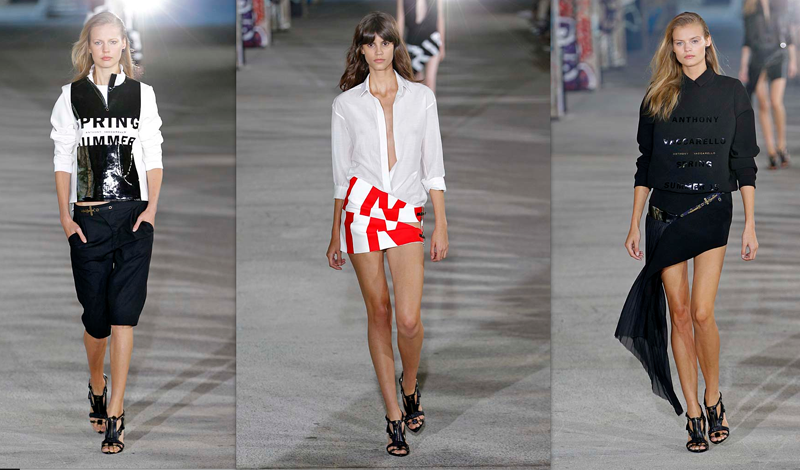 Anthony Vaccarello‘s sublimely sexy Spring collection featured his signature asymm ultra minis in an open concrete space with graffiti-lined walls that overlooked the Seine at Les Docks at Cité de la mode. Curiously, as we waited for the show to begin a pontoon boat casually floated by with men in preppy navy sweaters. It was not very French (who ever thought a pontoon boat would be spotted on the Seine), but it was very apropos of the theme.

There were a slew of Vaccarello’s signature minis, and by minis we mean just a centimeter away from revealing a little more than leg. They came in swaths of Lurex fabric that bared bits of his name as though cut from a banner. Striped navy numbers evoked a sailor theme and other pieces like a black deep-V mini dress that came with an anchor adornment on the strap of one shoulder was more subtle. But the real takeaway were the pieces with his name and the word “Spring” cut every which was as to look like it was wrapped around the body like a sail or flag. They were also said to be references to France’s many protests, much like the current ongoing protest with Air France, which has caused a few fashion week hiccups.