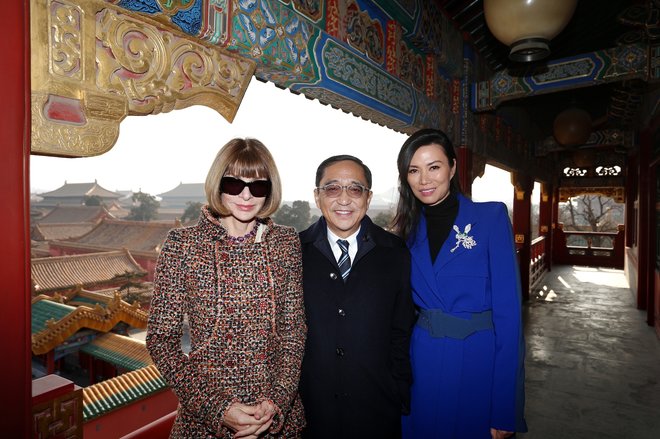 Having a wing named after you can involve some serious travel, clearly: Anna Wintour jetted to Beijing earlier this week for a preview of the upcoming exhibit, “China: Through The Looking Glass”. Though the show isn’t slated to arrive at The Met until May 7th, Wintour showed off a selection of the 130 eastern-influenced looks. This lineup includes one super-rare piece from Tom Ford’s last collection chez Gucci, and a Karl Lagerfeld-designed Chanel frock that was inspired by porcelain. She was, of course, joined by fellow boldfaced names including the curator of the Anna Wintour Costume Institute, Andrew Bolton, filmmaker Wong Kar-wai (who was tapped as artistic director for the exhibition), Rupert Murdoch‘s wife Wendi Deng Murdoch, and U.S. Ambassador to China Max Baucus. For an in-depth look at Wintour’s travels, head to Vogue. Now for the real question at hand: how many trunks had to be packed by Wintour’s assistants for this far-flung voyage?