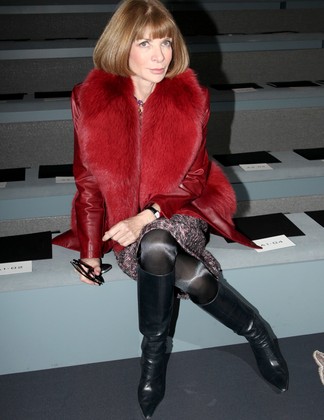 (NEW YORK) Anna Wintour just nabbed a powerful new capacity beyond her Vogue EIC gig, bound to keep her busy at 4 Times Square for a while: the editrix has been named artistic director of Condé Nast.

In her new role, Wintour takes on much of what S.I. Newhouse Jr. helmed at the company, propelling (and closely monitoring) the editorial direction of the publishing house’s myriad titles. Newhouse scaled back on his involvement circa fall. Thus, she will serve as an advisor of sorts for her fellow editor-in-chiefs, offering her two cents on ways to expand or redirect their titles. Wintour will also weigh in on all sorts of Condé matters, including the burgeoning Entertainment division and additional platforms beyond the company’s trademark newsstand jewels. Still to be determined, however, is if she will get final cover approval for titles other than Vogue, as Newhouse did (and purportedly loved doing), thus usurping a typical EIC duty at the likes of Vanity Fair and Glamour.

Ringing in a quarter century atop the Vogue masthead come summer, Wintour’s future at the glossy has been a bit nebulous as of late. Pourquoi? Her extensive involvement with the Obama campaign piqued speculation that Wintour might take on an ambassador role with the administration and decamp from Condé after 25 years of Vogue-ing.

Wintour will, of course, retain her editor-in-chief title at Vogue, as well as her role as editorial director at Teen Vogue.
ALEXANDRA ILYASHOV