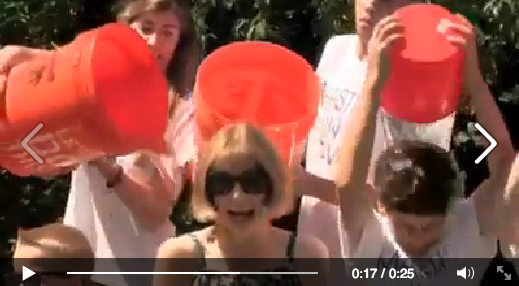 Bee Shaffer is called out her mother out again on Instagram and we are loving it. Remember the Christmas tree incident? This time Anna Wintour‘s daughter nominated her editrix mother to the ALS Ice Bucket Challenge…and she actually did it!

Anyone with a Facebook or Instagram account has likely had their feeds flooded with various friends dumping buckets of ice on themselves to raise awareness for ALS, a progressive neurodegenerative disease also known as Lou Gehrig’s disease. Shaffer took to Instagram in a white tee and a dark colored bra to accept the challenge from actress Allison Williams and then nominated her mother. Wintour took the challenge along with seven kids, who dumped their buckets on the EIC’s famously stiff bob. Fitting for media’s iciest queen, non?