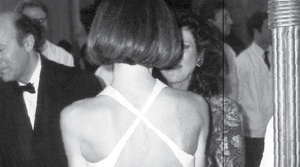 (NEW YORK) Anna Wintour was just a few years into her reign at Vogue when she landed on the cover of R.O.M.E. Here’s George Wayne’s classic 1992 Q&A with the woman who would rule your world.

GEORGE WAYNE: When people think of Anna Wintour, they think of this cold, aloof fashion editrix. Who is the real Anna Wintour?
ANNA WINTOUR: Oh, George, that’s for you to say. Come on!

Oh, no, it’s for you to tell me if that’s true or not. Do you like that image? Do you care?
No, it’s certainly not an image that I cultivate. I think maybe it was printed in one paper and, you know, some journalists just go out and write what they’ve read somewhere else. I know what the people that I work with think about me, and what my family thinks about me. I don’t worry about it.

Tell me a little about your childhood. Was it privileged?
Privileged? Not particularly. My father was an editor of a British newspaper, and my mother worked, but stopped when she had kids. There were four of us.

Where were you in the lineage?
I was second. My childhood was kind of normal.

Did you think, growing up, that you’d one day be one of the most important fashion editors in the world?
Well, I always wanted to get into journalism, I guess because of my father, because he was so known in the newspaper business in England. I guess I chose to go into magazines because that wasn’t so much his world. I certainly grew up knowing that being in publishing was something I wanted to do.

What is a typical day like in the life of Anna Wintour?
I’ll tell you what I did today. I got up at six, I read some copy, talked to my husband, got my kids up, made them breakfast, took them to school…

You take them to school yourself?
Every morning, yes. I took them to school, I had a 9 a.m. meeting with about 10 people about a trip being planned to Russia, then I read some more copy, edited, had a features meeting, then went to Seventh Avenue and had a fitting with Geoffrey Beene. Then I went to Marc Jacobs [at Perry Ellis], had lunch with him, and he showed me what he’s thinking about for his Fall Collection. And then I came back here. I looked at some pictures in the art department. I had a run-through with Carlyne Cerf, and now I’m here with you.

Do you meet with fashion designers a lot?
I do. I try and get into the market. I find it very helpful. Every time you go out there you get an idea; you get something that is in some way going to be translated back into the magazine. Some of [the designers] are more accessible and easier than others, but it’s fun. I love being in the market.

Are you happy with the current state of American fashion?
[Laughs] I found the Spring collections very, very interesting. I thought there was an enormous amount of ideas there. There is an awful lot of choice. Obviously there’s kind of a ’60s thing going on, which I think is great. What I thought was particularly strong was the amount of choice.

One thing I find especially appealing about you is the incongruous nature of your marriage. Your husband is a psychiatrist. He is not a particularly stylish man. He seems to be everything Anna Wintour is not. Tell me a little about your husband, your courting. How long have you been married?
We’ve been married six years, five or six years, I can never remember. I met him though English friends about seven years ago. His first wife was actually a fashion designer, so I guess he likes fashion. After he was separated from his wife, I was re-introduced to him.

So it was a quick romance?
Pretty quick, pretty quick.

What do you think about Mirabella magazine?
[Pause] Well…[pause]…to me, it’s not a fashion magazine. I think it’s heavier on the features. It seems to be a more general interest magazine, and obviously, to my eye, it seems aimed at an older reader than some of the other magazines of that kind. I think its size is great. I wish I could have that size.

Do you read it?
No, I don’t. That has nothing to do with Mirabella because I really don’t read any other magazines.

You don’t read other magazines?
Not in the fashion world. So many other people are obsessed with what other people are doing. I take a quick look, but there’s too much out there. For my own personal reading, I’d rather read The New York Times or R.O.M.E., something that’s not so much my world, and my point-of-view. I don’t want to be influenced by what other people maybe doing.

Do you read Vanity Fair?
Well, I certainly look at Vanity Fair, and I sometimes read it on the plane. But again, it’s just really a question of time. My weekends I usually read a book. Vanity Fair is a terrific magazine, but I’m not pouring over it to see what they are doing.

What do you think of Tina Brown?
A brilliant editor.

Is she a friend?
Yes, I’ve known Tina for a long time, and her husband is a great, great friend of my father’s. And I have great respect for Tina. I think she’s doing an amazing job.

Would you say that Vogue under your tutelage has incorporated a “downtown sensibility”?
[Laughs] I don’t think we edit with uptown or downtown in mind. I think we edit for a woman that’s interested in fashion. It’s a personal attitude, I think. Maybe there is a bit of downtown, maybe there’s a bit of L.A. It’s a mix, more than one point-of-view.

If there is one thing you would change about your physical appearance, what would it be?
I’d be taller. I think I’d like to be taller.

Do you aspire to anything more than this job?
Well, you never know what’s going to happen, but this is such a great job, and I’m having so much fun. I certainly want to be here for the foreseeable future.