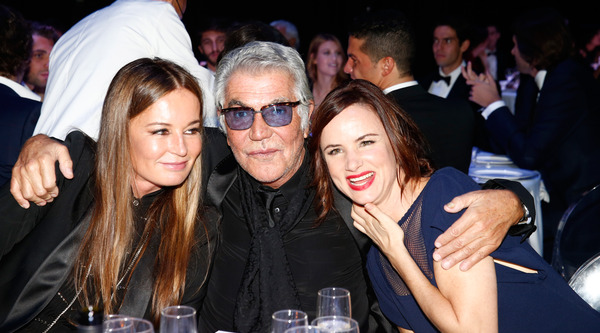 (MILAN) One of the toniest events of Milan Fashion Week, the amfAR gala is also without a doubt the most beneficial. Sponsored by Hublot, Moët Hennessy, and Mercedes-Benz and with partners like Delta and The Westin Palace Hotel, the who’s who of the Italian social set showed up to the fashionable fundraiser. To note, the Milanese do not shy away from showing off: If the glamorous display of gowns and tuxes were any indication, it forecasted a great evening of fundraising for amfAR.

Case in point? When Roberto Cavalli laid down a bid of 65,000 Euros on a diamond-encrusted Hublot watch, an unknown gentleman in the back of the room briskly outbid him, which started a spirited, rowdy bidding war between the two. After going back and forth about five times outbidding each other as the room clapped and egged them on, the unknown gentleman outbid Cavalli’s 100,000 Euros by raising his price to 110,000 Euros. So what happened? Hublot cleverly suggested to the auctioneer that they’d gladly make two watches for the duo of bidders if each donated 100,000 Euros. Done deal. The two gentleman both agreed, and amfAR got 200,000 Euros out of the duel. Quite a show!

Back to the evening’s cause: Juliette Lewis took post to introduce the evening as well as Jeffrey Epstein and Robert Friedman‘s new documentary film, Battle of amfAR, which was produced by Kenneth Cole. Lewis good-humoredly apologized to the crowd for not being last year’s presenter: “I’m sorry I’m not Sharon Stone. I get wild in other places.” Shortly thereafter Lewis introduced Kenneth Cole as “a little bit rock n’ roll and a lot badass.” As he took the podium, Cole looked to Lewis with a laugh and said, “Sharon Stone would have never done that.”

The good humor continued throughout the evening and we caught up with DSquared2 designers and twin brother Dean and Dan Caten to find out their take on the event. “This is an important event to get people out, to excite them, and to spend a little cash,” said Dean Caten. “It’s great for designers because the ladies have to buy dresses! European women really get done up and like to show off,” said Dean Caten. Added his brother Dan, “Who doesn’t like to dress up and go to a gala event? These are the richest people in Milan. Dig into your pockets, pull out some money, and save some lives!”

And dig in their pockets they did, by bidding on everything from Andy Warhol photographs of Gianni Versace and Giorgio Armani presented by Karolina Kurkova to a Vionnet gown avec two front row seats to the upcoming Paris show. At current currency rates, the event raised $1.25 million for the organization benefitting AIDS research. Well done!
PAIGE REDDINGER