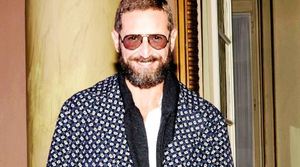 (NEW YORK) As most departures from high fashion houses are followed quite closely, the departure of Stefano Pilati from YSL was the buzz of the town back in February 2012. Now cozily settled in his new post as head of design at Ermenegildo Zegna, the designer checked in with WSJ. from his Berlin-based studio. The issue comes out October 12. Lucky for you, we did a thorough read of the glossy’s piece. Without further ado, a half-dozen fascinating facts about Pilati and his latest act!