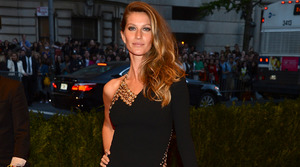 (PARIS) With the haute couture collections looming, one name to watch is Alexandre Vauthier, the Thierry Mugler and Jean Paul Gaultier alumnus who has been dressing entertainers like Rihanna and Roisin Murphy. Invited by the Chambre Syndicale de la Haute Couture for the first time this January, Vauthier talks about his growing house and his upcoming presentation.
D’ARCY FLUECK

How did you start in the fashion industry?
I was born in the South of France and I actually started in law studies, but as it didn’t really work out, I went towards what I had been dreaming about for years: creation and esthetics. There are different ways of expressing that, but I chose clothing. I actually wanted to work for three people when I came to Paris: I wanted to work with Karl Lagerfeld, Thierry Mugler and Jean Paul Gaultier. Karl will always be the absolute God for me. But I started with Mugler first. I was 21 years old, and there was a side of his fashion that was super attractive and very scenic, outside of the dictates of the industry. We met and worked for 4 years together. I guess you could say that I was his spiritual son or his little brother, in any case he was my first employer and I think it’s a little like a first love. Afterwards when the house [of Mugler] started to change then I met Jean Paul Gaultier and voilà! He asked me if I would like to work on his couture with him. Jean Paul giving me the responsibility of his couture collection was amazing and a huge challenge. It was really something extraordinary. I will thank him all my life for having the confidence in me, it was an excellent collaboration and I stayed 8 years with him. Afterwards I travelled and was supposed to go to a big house in Italy, but I didn’t know if I wanted to go into a design studio again. I ran into Thierry Mugler, who asked me where I was. He called me back one night and said I think it’s time you did something for yourself, and that’s how I got the courage to do what I’m doing now.

Tell us about the Alexandre Vauthier woman?
I don’t know. I think others can describe it better, as everyone sees different things. There are those that see the super powerful side, which I don’t work that much. There are those that see a very elegant side, which I actually work at a lot. Some see a very sexual side, which I don’t at all, I see something more sensual. Or something more balanced in any case. I’m very attentive to the women around me. I dress 20-year old R&B singers as well as actresses in their 70s. If I had to give you a definition I would say that I design for a woman of her time. A woman who has desires, who loves luxury, things done well, and who belongs to a certain elite but who has access to a new code of elegance.

How did you come to meet Rihanna?
Her stylist Mariel [Haenn] saw my work. It’s a double edge sword when you dress stars like that. There are some that will love it, and others that will hate it. But it’s true that it gives you a certain visibility. In any case, beyond the fact that it’s Rihanna, she’s also someone I adore personally, which is why we work together.

What can we expect from your next collection?
Oh la la! I am pretty American or Anglosaxon, let’s say. I’m really passionate about everything that is visual, images, songs, etc. But for this collection it’s actually going to be an homage to a French actress.

Can you tell us who?
No, absolument pas! You might be able to tell but it will be very subtle. There are a few new influences in this collection; it’s going to be different from my collections of the past. For the first time there will be long dresses. There are some very classical materials, some leathers, a little bit of fur even though it’s summer. It’s also the first time I’m working with cashmere, a summer cashmere. I’ve also included a latex mousseline and a latex organza, it’s just sublime! The colors are excessively feminine, and I’ve also developed a lot of jewelry for this season, pieces that are really discreet. Also we’ll present our first pair of sunglasses.

Do you have any plans to do more prêt-a-porter?
I already do more, but I don’t show during the ready-to-wear schedule. I just prefer the haute couture schedule as it’s more exclusive, there’s something more precious. I prefer to stay a bit more discreet—my lines are growing more and more, but I prefer to have an association with the fashion ateliers who help me each season. Their work is really exceptional.

p>Alexandre Vauthier will show his Spring/Summer 2011 collection on January 24th 2011. His collection can be found at Just One Eye LA in the United States.

We Have Questions; Tavi Has Answers!