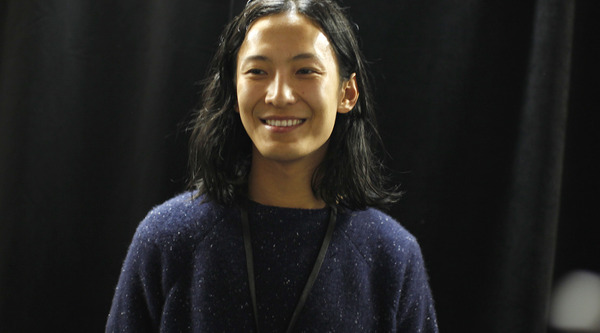 (NEW YORK) At long last, the much anticipated debut of Alexander Wang at Balenciaga has arrived! How did he fare? Refined and sculptural, per Cristobal Balenciaga’s aesthetic credo, got heeded by Wang. Full review ahead, plus a roundup to follow of what critics’ klatch had to say!

The New York designer can certainly build on these clothes for next season, adding color and maybe more decoration, but if he continues to strike that modern balance between couture and the street, he will renew a great name — and win over doubters

The collection felt a bit solemn and nunnish, but with interesting details, not for the sake of being interesting, but as references to various bits of Balenciaga lore. The curved hems on black coats that opened the show (a short sleeved, fur accented one-button jacket, split at the waist, for example, or a cropped three-quarter length wide-sleeved topper) characterized the venerable house’s ancienne codes of half a century or so ago. Wang riddled the collection with cocoon silhouettes and sharp peplums, too. Also on the menu? An all-noir ensemble consisting of a sleeveless crop top paired with cigarette pants or a white short sleeve two tiered top worn with a black pencil skirt. A hard bodiced floor-length black dress sported loosely-draped fabric from the shoulders, draped in the back, and had a simple and sophisticated elegance.

Thus, Wang was serving up just what monsieur Pinault ordered: A wearable and, most importantly, sellable collection. Retail-friendly did not equate to boring, though. Take a simple white shirt: The runway’s mirrored backdrop revealed a deep cleave, peeling down from the shoulders to reveal a marble-esque pattern, mimicking the catwalk itself. Likewise for a black crop top, underlain with a bra-like bodice tied with two bows, a Cristobal signature. Bows, in silver, also found their way onto sleek boots (in noir, naturally) but they were anything but sweet. Wang worked his street wiles by making them have more of a barbed wire affect. Elsewhere, crackled pattern structured tops like a white turtleneck and a black crop top looked like leather, but were, in fact, painted knits. To round out the show, cropped furs got paired with high waisted pants, both having undergone the crackle effect as well. Pants featured cut-out pattern that revealed subtle hints of skin for a touch of sex appeal. Cool, sure, but truly wearable. For the dubious types, this collection seems to evidence that Wang won’t be falling through the cracks in his Balenciaga capacity anytime soon.

Plus! The critical consensus is…Go, Wang, go!
“The New York designer can certainly build on these clothes for next season, adding color and maybe more decoration, but if he continues to strike that modern balance between couture and the street, he will renew a great name — and win over doubters.”—Cathy Horyn

From the point of view of François-Henri Pinault, chief executive of the brand’s owner, PPR, the collection must have been heaven sent: distinctly Balenciaga, with no traces of the wilder and woollier downtown spirit that Mr. Wang shows in New York.”—Suzy Menkes

“The perfect balance between edge and elegance.”—Neiman Marcus’ Ken Downing (to The NY Times‘ Eric Wilson)

“Some in the audience said Wang’s collection didn’t have the shock of the new that even Nicolas Ghesquière’s earliest shows for the label did. That may well be true. But if the silhouettes hewed closely to the house’s rigorous lines, Wang fused technology and technique to come up with compelling new textiles…It would be good to see some more of his own personality in the mix next time, but all in all, this was a sure-footed start.”—Nicole Phelps, Style.com

“The verdict: An auspicious start. Wang stayed true to the heritage of the house, and even to his predecessor Nicolas Ghesquiere’s contribution of using high-tech, cutting-edge materials. Wang also succeeded at creating clothes that not only beg to be looked at and revered, but also to be worn. And that should get the cash registers humming — which, after all, is what he was hired to do.”—Booth Moore, Los Angeles Times