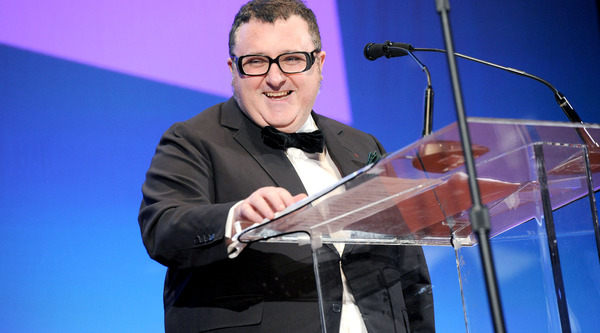 (NEW YORK) The Waldorf Astoria got a massive dose of inspiration last night, thanks to the YMA Fashion Scholarship Fund‘s 50th anniversary of the Geoffrey Beene Fashion Impact Awards. Leave it to Lanvin’s adorably bespectacled leading man to bring the poignant punch. On the premises: an array of notable industry movers and shakers, including the eve’s host, Alina Cho of CNN, designer Bibhu Mohapatra,  W’s Stefano Tonchi, Paper’s Kim Hastreiter and the guest of honor, Lanvin’s Alber Elbaz. Each year 130 standout fashion students from colleges around the country are invited, with the top eight receiving scholarships to pursue their dreams with aid from the fund. And dreams are just what honorary lifetime achievement recipient Elbaz, was on hand to discuss. “When I arrived in New York I had two suitcases: one little one for my clothes and a big one for my dreams.” Why the connection between Elbaz and Beene’s namesake org? A former protégé of Beene, Elbaz designed for Beene for seven years.

Elbaz has a rep for his good humor and humility, as well as those exquisite designs whipped up from his artistic director perch at Lanvin. But when he first arrived in New York, the designer was sans job entirely. Only after endlessly pestering Beene’s secretary, Joyce, whom he thanked profusely during his speech, did Elbaz secure his first meeting with the design great. The outcome? “It was seven years of hard work and a lot of laughs.”

Despite Elbaz’s brilliant career trajectory since those secretary-stalking days, seems like that humble streak is somewhat genetic. “My mother always told me that success is like perfume. You can always smell it, but you must never drink it.” Whether the students in the room will be as successful (and humble), remains to be seen. Bon courage, dear students! Will the next Alber Elbaz please stand up?
PAIGE REDDINGER

Catching Up With Leora Kadisha Of StyledOn