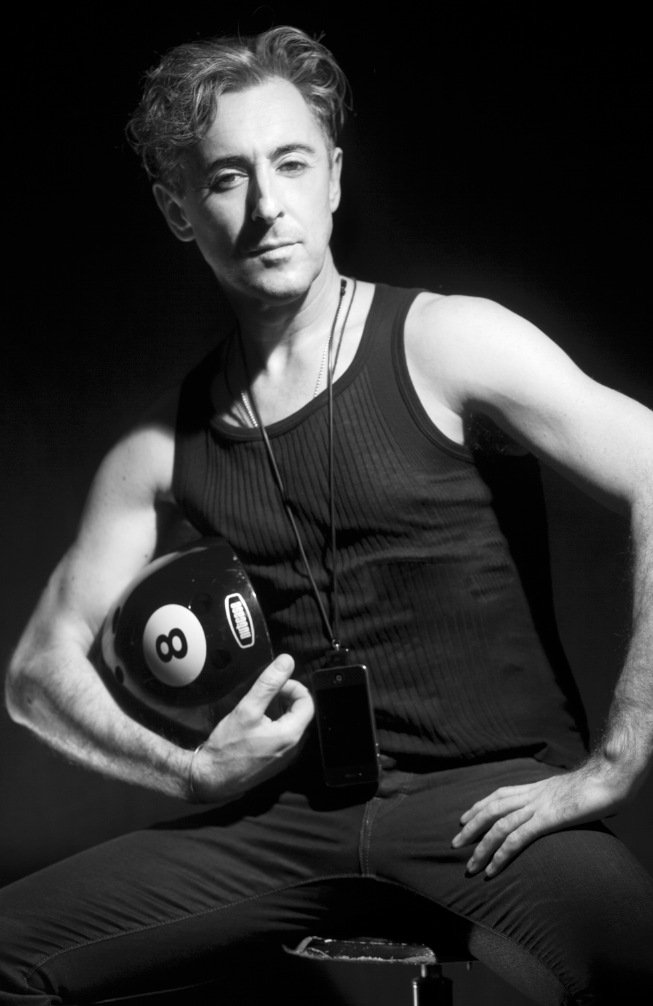 Talk us through the book, Alan.
It’s about a summer four years ago when I was about to do the BBC TV show Who Do You Think You Are? I had been hoping to solve a mystery about my maternal grandfather. The night before I started filming, my father, who I had not seen for 16 years, came out of the woodwork and told me that I was not his son. The book goes back to my childhood and my relationship with my abusive father. Ultimately, it’s about transcending all of that. It’s actually a very hopeful book.

How so?
It shows that people in abusive situations can overcome them and find happiness. My mother, brother, and I were able to overcome all the things that my father had done to us and sort ourselves out and be happy people away from him. That took a long time. That summer was almost my father’s last hurrah of coming into my life and causing chaos again. The ending of the book is you see us together in a situation that my father couldn’t affect
or spoil.

People think of you as a lighthearted person.
It would be reasonable to think the perception of me is a kind of carefree and loving person, and I am, but [this discovery] was a huge thing to happen to me and I’m about to turn 50, so I wanted to tell this story. You almost have a duty to tell people the whole story. I’m not just fun—this also happened to me. It explains why I’m fun now, because I wasn’t fun when I was little. I’ve found my own fun in life and maybe that’s why people have this notion that I’m childlike.

There’s also humor in the book.
You have to have a sense of humor about yourself and your life. There’s a lot of laughs, but you’ll also probably cry reading it. It’s pretty intense. I was weeping and laughing at the same time.

You’re going to be doing a press tour. Will it be weird talking about such a sad topic over and over again?
It will be. Every time you go in to do interviews for a project that you have a personal involvement in it’s more daunting than just talking about some dopey film. It’s about some very painful episodes in my life. I’m nervous about it. Ultimately, at the very end, I’m so happy to be able to tell my story because it means my story will never be accepted. The very fact that I’m doing this frees me from it because the worst thing about abuse is that both the abuser and the abusee accept that as the norm. I’m excited about taking this out to the world because it means it will never be acceptable.

Did you ask for your mother and brother’s blessing?
Absolutely. I consulted them all the way through it. I asked them to help check facts and, before I submitted it, I let them both read it. They were involved all the way through.

Does the imminent pub date of the book make the story feel finished?
I feel like when it comes out there will be this explosion of intensity about it. People will say, “Alan Cumming had this crazy thing happen to him.” I’m obviously going to be talking about it a lot. I don’t feel it’s over yet, though. I’m girding my loins for another onslaught of it, but I do feel the positive aspects are already overweighing any anxiety about it. It won’t feel over until…who knows? That’s the thing about the story… It goes on and on and on. It never stops. Maybe when it’s out in paperback?

Would you consider directing the book as a movie?
No. It doesn’t interest me at all to revisit it in a fictional way.

What’s your next book going to be?
A couple of years ago I had an exhibition of photographs and I wrote a little story for every photo. Every picture not only tells a story, but also hides a story. There’s a picture I love of Liza Minnelli called “Sweet Liza” that was taken at her birthday party with cupcakes—the cake topper was Liza and her arm broken off. I love that picture. The story is about my relationship with her and how much I love her and what a trouper she is. There will also be several stories about my beloved dog, Honey. The working title is, You’ve Got to Get Bigger Dreams.

On a lighter note…why do you like going to fashion shows?
When you’re famous you can’t just be a voyeur and look at people because everybody’s looking at you. At a fashion show, you can do that. You can geek out on being a voyeur. You don’t even have to look at their heads. You can just look at their bodies without any shame.

Thoughts on the front-row madness?
It’s a bit hilarious when you’re sitting beside someone famous and it feels like a celebrity petting zoo. I wish people would stop asking such banal questions like, “Do you like fashion? What do you think of the trends for the season?” I say, “I think shoes are going to be popular! Trousers are very big and shirts are going to do very well.” Really? The standards of questions at fashion shows are B-minus.

What would be a good question then?
I like when people ask after a show, “What did you think of the show?” I like when they ask about my sense of fashion. We’re all there to look at clothes. It’s not that interesting. There’s not that much to say. Did you like the clothes? Yes. Are you going to wear some of those clothes? Yes. Do you like Fashion Week? Yes. I love it. Everyone in the fashion world should take a chill pill and realize it’s not the most fascinating or important thing in the world. If they did chill, I think it would be a lot more fun for everybody.