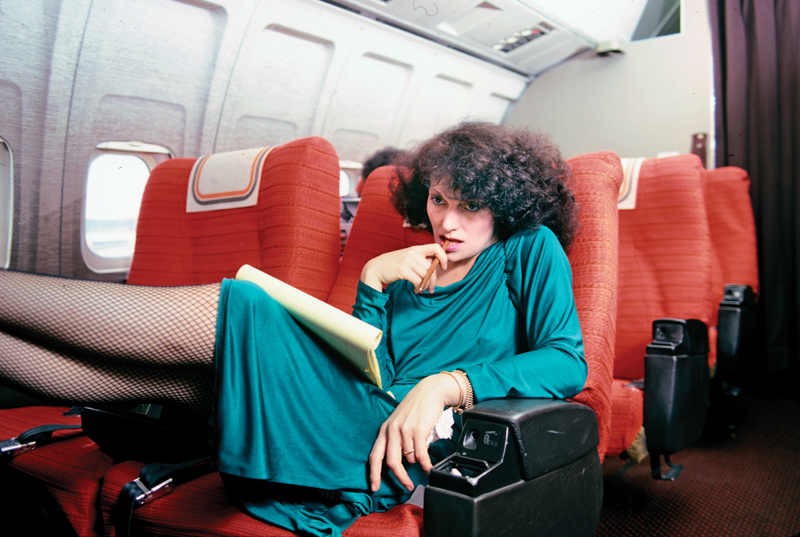 Portrait of Diane von Furstenberg as she sits on an airplane at John F. Kennedy Airport, Queens, New York, May 1979. (Photo by Susan Wood/Getty Images)

Even the most seasoned travelers still struggle to stay sane in the plane. The Daily wonders: What drives you batty at 30,000 feet?

“Snoring when I’m trying to sleep. Or if someone wakes me up when I’m sleeping!” —Miranda Kerr

“Having to put my bag in the overhead compartment instead of being able to leave it by my feet.” —Demi Moore

“What doesn’t annoy me on a plane? Mostly it’s other people. A lot of noise bothers me. There’s something about people playing Candy Crush on their phones—they don’t turn the sound off so I can hear it from like 10 rows back. But I’m pretty vocal on the plane, so I’ll go over to them and discuss it. I’ve also been on planes with people cutting their nails next to me. It’s like, ‘Can you wait to do that?’ I could write a book.” —Adam Lippes, designer

“I’m a younger designer, so that means I’m frequently flying in like 34B, and that’s pretty tough.” —Wes Gordon, designer

“When they’re late. All I do is wait. I watch a lot of movies and TV shows…I’m currently watching House of Cards.” —Derek Jeter

“The feeling of, When is this is going to end?!” —Taylor Hill

“The dry air! It makes your skin crack.” —Wendi Deng

“When the AC is hitting your face. But I just turn it off, so I guess nothing, really. I actually love flying. I just sleep.” —Lucky Blue Smith

“When the person in the next seat takes off their shoes and socks.” —Rosie Huntington-Whiteley

New In Town: Jean-Georges Heads to the East End

There’s Something About Jeremy