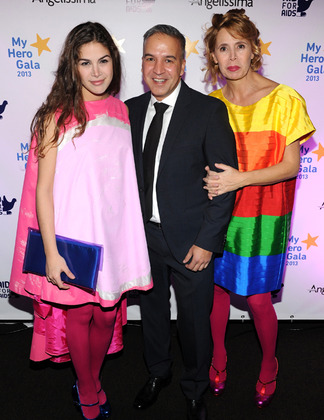 (NEW YORK) Last night AID FOR AIDS (AFA) International hosted its 2013 My Hero Gala to raise money for the awareness and fight against HIV and AIDS at Three Sixty on 10 Debrosses Street in Tribeca. AFA primarily works with Latin American immigrants in the USA and has six offices across Latin America. This year the event honored Peruvian artist Ernesto Pimentel and Dr. Robert Redfield, who is the co-founder and associate director of the Institute of Human Virology at the University of Maryland School of Medicine for their fight against the disease. Pimentel, who himself has suffered from the disease, was instrumental in finding a facility and support for AFA during it’s initial stages of work in Peru. Dr. Redfield is known for his pioneering research that developed a staging system that is used worldwide in the clinical assessment of the HIV virus. In the 1980’s he was the first to discover conclusively that the disease could also be transmitted to heterosexuals.

In his speech for the evening Pimentel recalled how he was outed publicly for his plight with the disease when he inititially contracted it. “At the time I was very successful in my career and someone published a book that mentioned that I have HIV/AIDS. The writer went publicly on a program and told all of Peru that I had HIV/AIDS and at the time I was wondering how much a coffin would cost,” said Pimentel. The first social worker he encountered who he went to for help with tests and medicine told him, “How can you get a disease only homosexuals get? This cannot happen to anyone else.” Thankfully, that perception has changed drastically since the early years of the disease. “No one…not one person should die from this disease,” said Pimentel. Not only has perception changed, but so have the lifespans of those living with the disease. “When I started in the Eighties the men and women that I was asked to take care of had about a 10 month survival and today they can potentially live a natural lifetime,” said Dr. Redfield. “But if the benefits of science can only be distributed to a few, I don’t think that’s what’s meant to be. I think the world is a much better place when the collective benefits of science are available throughout the world.” And AFA is helping do just that by getting medicine to those in need.

On hand to support the event were fashion notables like Carlos Campos, Nicole Miller, Angel Sanchez, and Agatha Ruiz de la Prada. The latter designed all of the colorful table decorations and she herself was decked in one of her rainbow colored dresses and had her daughter Cósima Ramírez in tow in a cotton candy pink trapeze dress. Guests dined on sea bass and filet mignon and later danced the night away to latin-inspired music as others bid on art auction items from artists like Robert Crumb, Tony Becchara, John Waters, Cindy Sherman, Julian Schnabel, and even Marc Jacobs. So how did they raise? $400,000. Bravo!

Catching Up With Escada's Megha Mittal At Saks Fifth Avenue