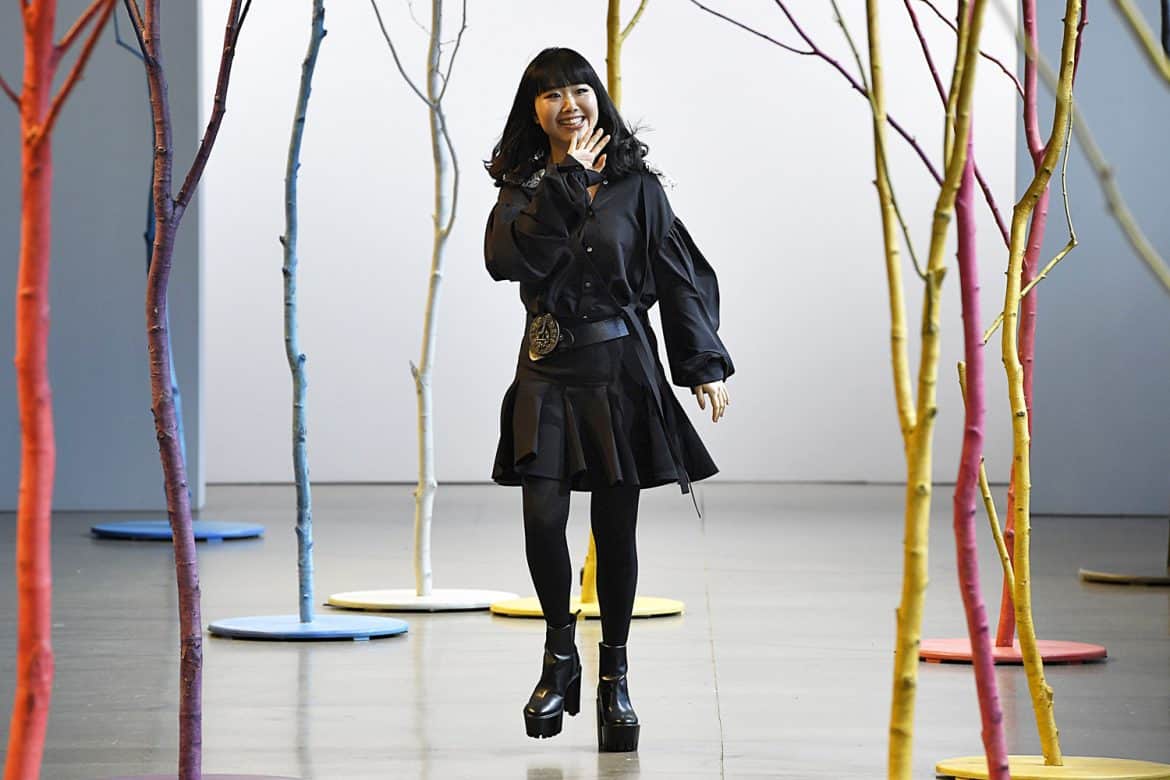 Hanako Maeda has spent her life between Japan, where she was born, and New York, where she spent parts of her childhood and youth. After graduating from Columbia University she moved back to Tokyo to launch her line, Adeam, in 2012. For Fall 2013 she showed at New York Fashion Week, where she has been presenting ever since. Now with 10 seasons in the city under her belt she is reflecting on her time at NYFW — and is pushing things forward with a new bag launch at Bergdorf Goodman.

Your show last month was your 10th at NYFW. Do you remember your first show in the city?
In the beginning I was doing a presentation format. My first runway show was for Fall 2014. I love being in New York and also at NYFW because there are designers from all over the world. New York is one of the most diverse cities, and there are a lot of international designers here. [For Fall 2019] I decided to show at Spring Studios, which was the official venue for fashion week this season. I’ve always shown off-site, but it was great to be surrounded by other young designers.

What are some of your favorite things to do here?
I love just walking around the city and taking in the scenery. One of the great things about New York is there’s a walking culture, and there are also amazing public transportation. When you’re walking the streets, you find people with amazing style and very unique ways of putting together their clothes. I studied art history in college, so I love going to all of the galleries in Chelsea. My studio is also in Chelsea. I love going to Gagosian, Pace, and David Zwirner. 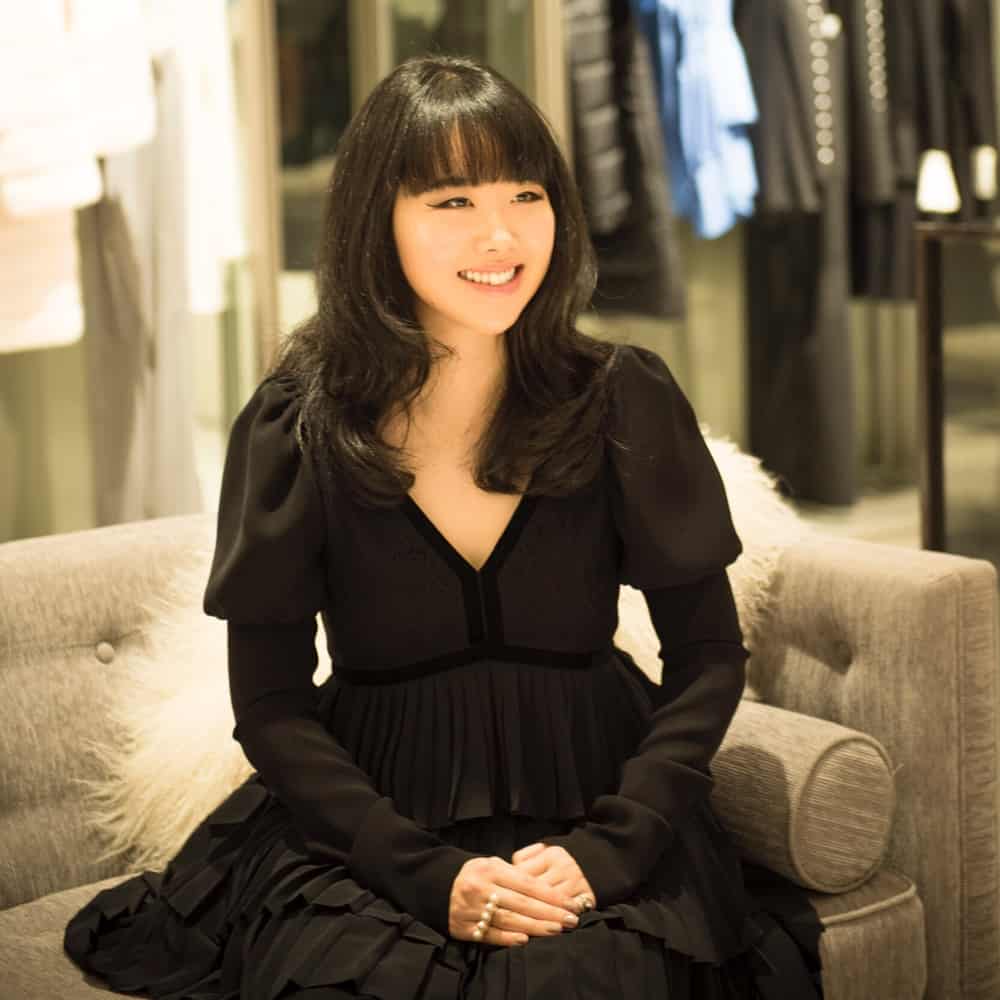 As an art lover, are there any galleries or specific artists from Japan that you think we should check out?
I really like SCAI The Bathhouse in Tokyo. It’s an old bathhouse that they converted into an art gallery. They exhibit a lot of Japanese designers. I went to an exhibit by Kōhei Nawa last year, and his work is very unique. It’s almost like an idea of a factory. He has a team of people working with him, and he uses a lot of materials that are unique to Japanese culture. His work is also exhibited in the Metropolitan Museum of Art in the Japan wing. He’s one of the younger artists that’s coming up in Japan right now.

Did you want to do anything special with the collection to celebrate the anniversary?
I’ve always focused on my Japanese heritage for my collections. This season I was inspired by the Ainu culture of Hokkaido, which is one the oldest Indigenous tribes of Japan. [On the runway] I used birch trees but painted them in the colors from the collection like turmeric yellow, fuchsia, and also bright blue. Production wise, and also in terms if the venue, it was a much larger scale show than what I’ve done before.

What drew you to their story?
Last year in Hokkaido there was a really big earthquake. I really wanted to support Hokkaido as a city because a lot of the time in international news, in terms of focusing on Japan, there’s a lot of news on Tokyo and Kyoto and cities like Osaka, which are more cosmopolitan. But the Hokkaido culture is one of the most unique in Japan. 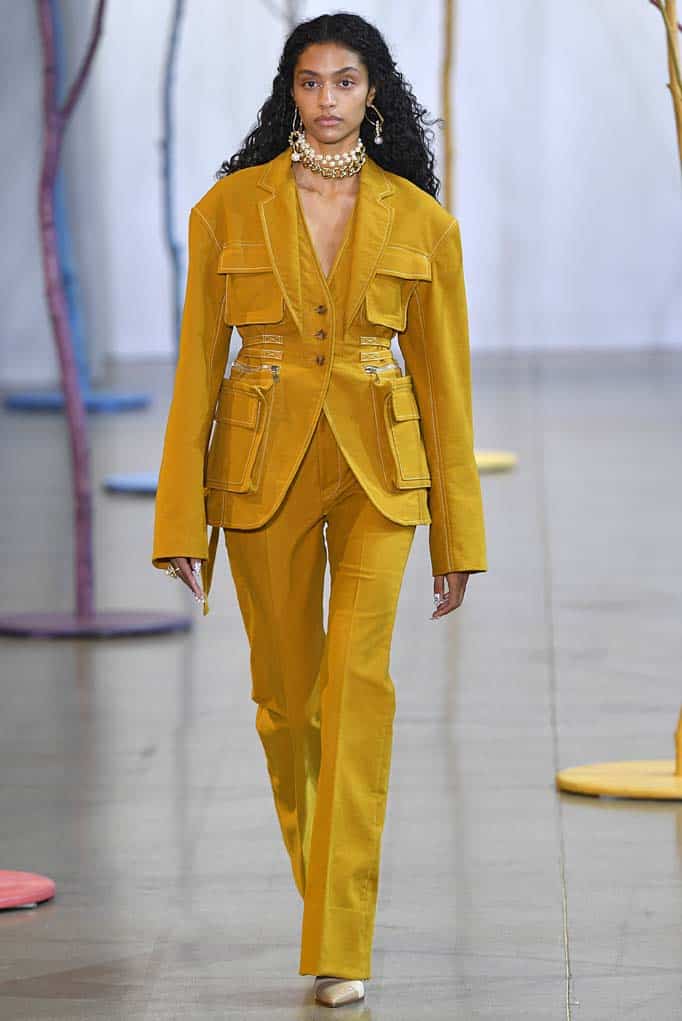 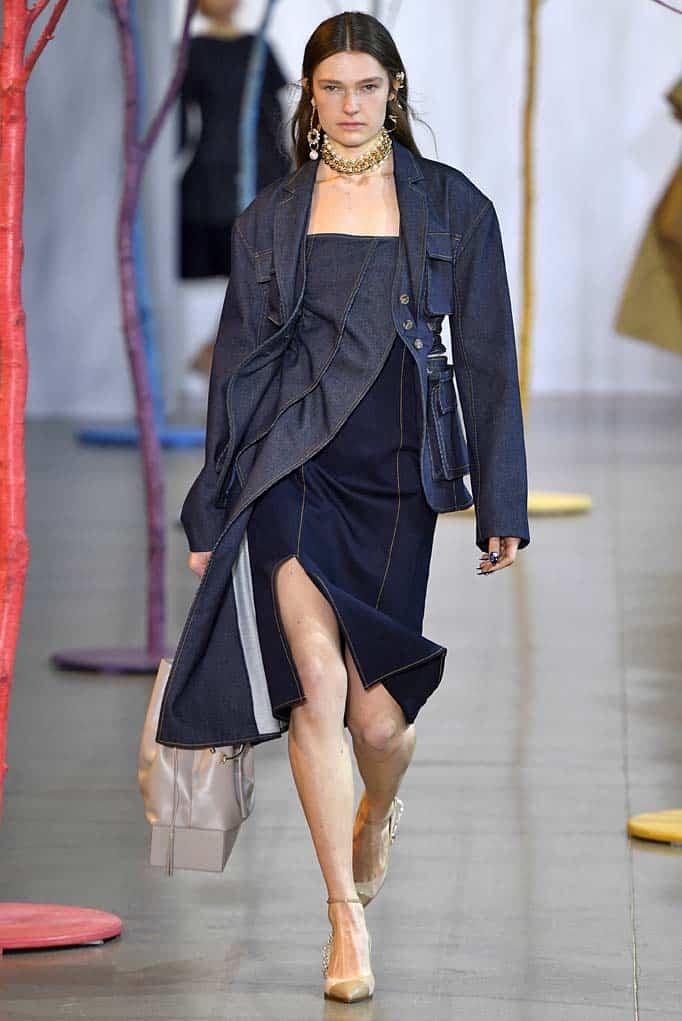 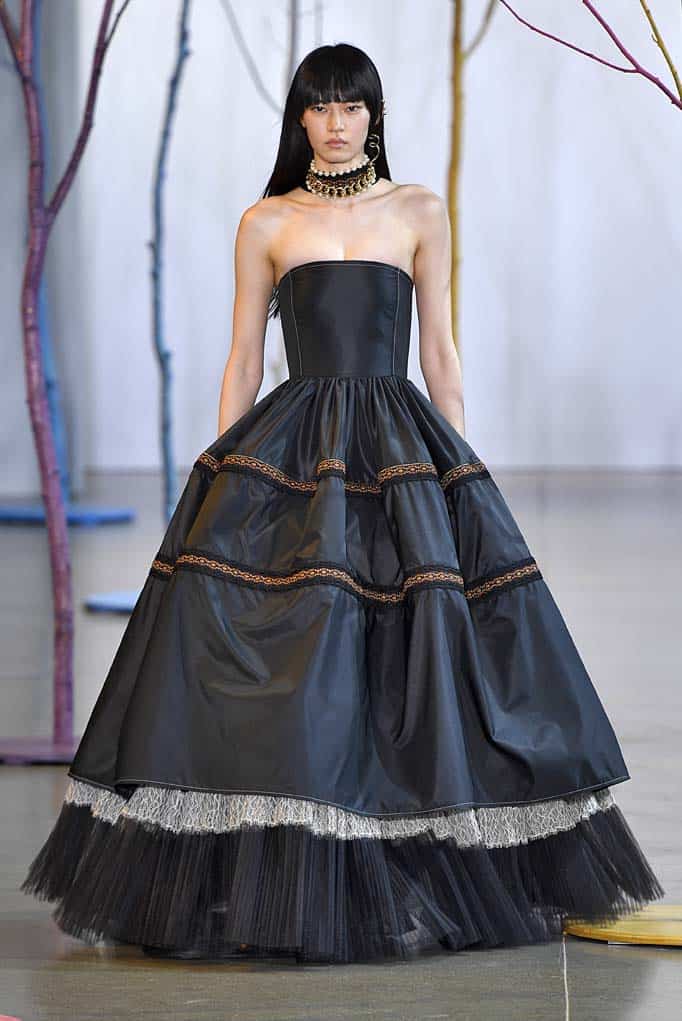 Tell me more about the Ainu women.
They have a very different lifestyle because they’re surrounded by nature. The Hokkaido culture, especially the Ainu culture, is all about living in harmony with nature. They use plants and flowers as dye. A lot of their embroidery is inspired by what’s around them. This collection was really about that idea of living in harmony with nature, and this was also my first season using faux leather and also faux fur. That was a really important aspect for me — this idea of sustainable clothing and living a sustainable lifestyle in harmony with nature. The other thing is the Ainu textiles and the Ainu culture of arts and crafts focuses on this idea of an artisan and perfecting the hand-crafted details in a garment.

How long has sustainability been important to you and your brand?
We’ve always done all of our production in Japan, and all of our factories are very close to our headquarters in Tokyo. We’ve always worked with factories that practice sustainability and practice production in an ethical way. I also wanted to really think about the materials that we use, so most of our fabrics now are from Japan. We use some fabrics from Italy, but they’ve also been produced in a sustainable aspect.

You’ve been working with nail artist Mei Kawajiri for a few seasons now. How did you guys meet?
I found Mei on Instagram. I was fascinated by how she approaches nails — it’s almost like art. All of her illustrations are hand-painted, she’s an amazing illustrator. She’s collaborated with brands like Balenciaga. She actually did their men’s show in addition to their women’s show. Her work is a little bit unisex which is very relevant. Clothing is not really defined by menswear and womenswear [anymore]. Everybody can choose and mix and match what they want to wear.

So you just slid into her DMs?
Yeah! I was like, “Would you be interested in working with us for the show?” She knew about the brand. She really loved the Adeam aesthetic, so the conversation was very organic.

Did she know what the collection is going to look like before the show?
Because she’s based in New York, she actually came into my studio. I showed her all of the fabrics and some of the samples that were done early. For the Fall show I wanted to focus on pearls, because pearls became a really huge detail for all of the jewelry that we’re doing. I wanted to do pearl nails in a way that felt modern and fresh.

Has she ever done your nails?
Yes! Actually, I didn’t have time to ask her to do my nails this season, but last season for Spring ‘19, when we did the show together, she did my nails. I wanted to use the Kirakira glittering emoji as a motif on my nails so she did two coats of glitter clear, translucent nail polish, and then she hand drew the Kirakira emoji on my nails. It was really cute!

You just launched a bag line at Bergdorf Goodman! How long have you been doing bags?
It’s actually our third season. We launched the first season in the U.K. with Selfridges. Bergdorf Goodman is our first official launch in the U.S. The handbag line has really grown to a full collection. Our inspiration for the Spring ‘19 collection was ’90s disco. We showed our collection inside the old Tunnel club in Chelsea. I took this idea of the Kirakira Harajuku street culture from the ’90s, and I named one of our bags as the Kira Kira bag. A lot of the inspiration from the handbags comes from ’90s youth culture in Harajuku. 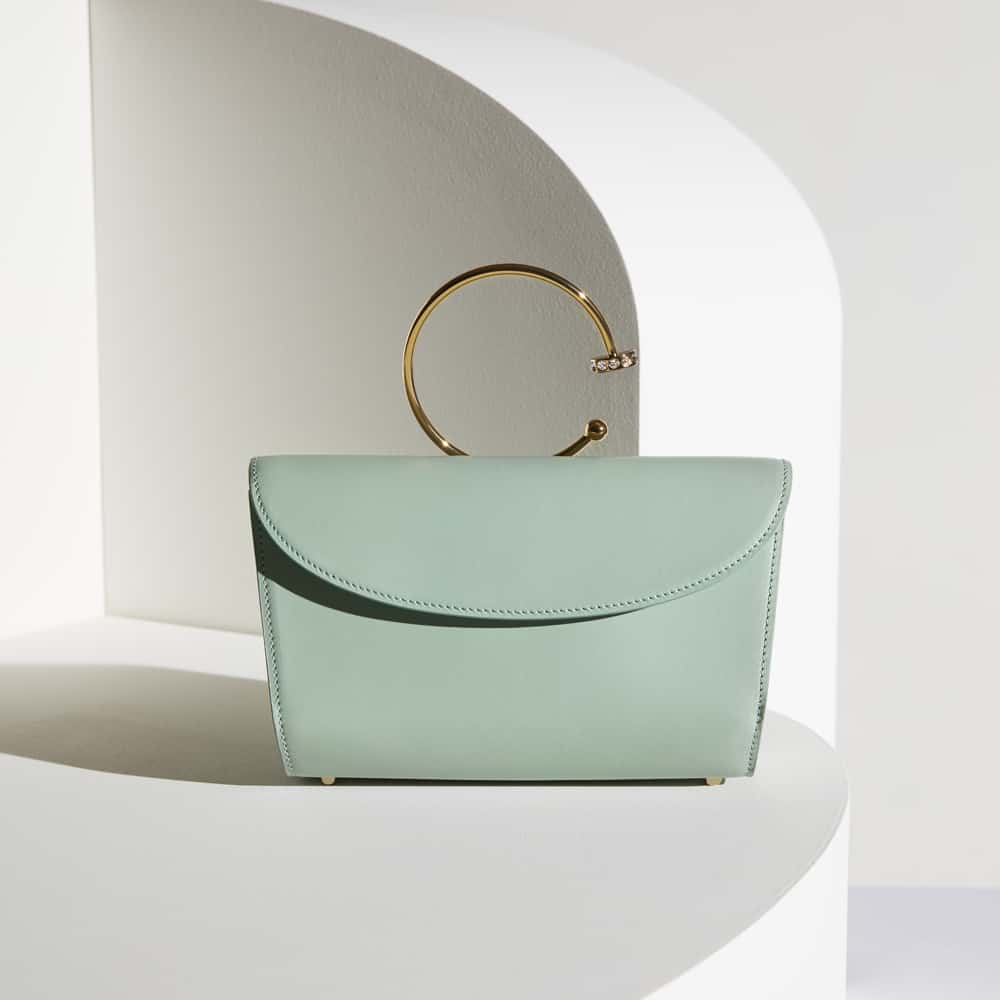 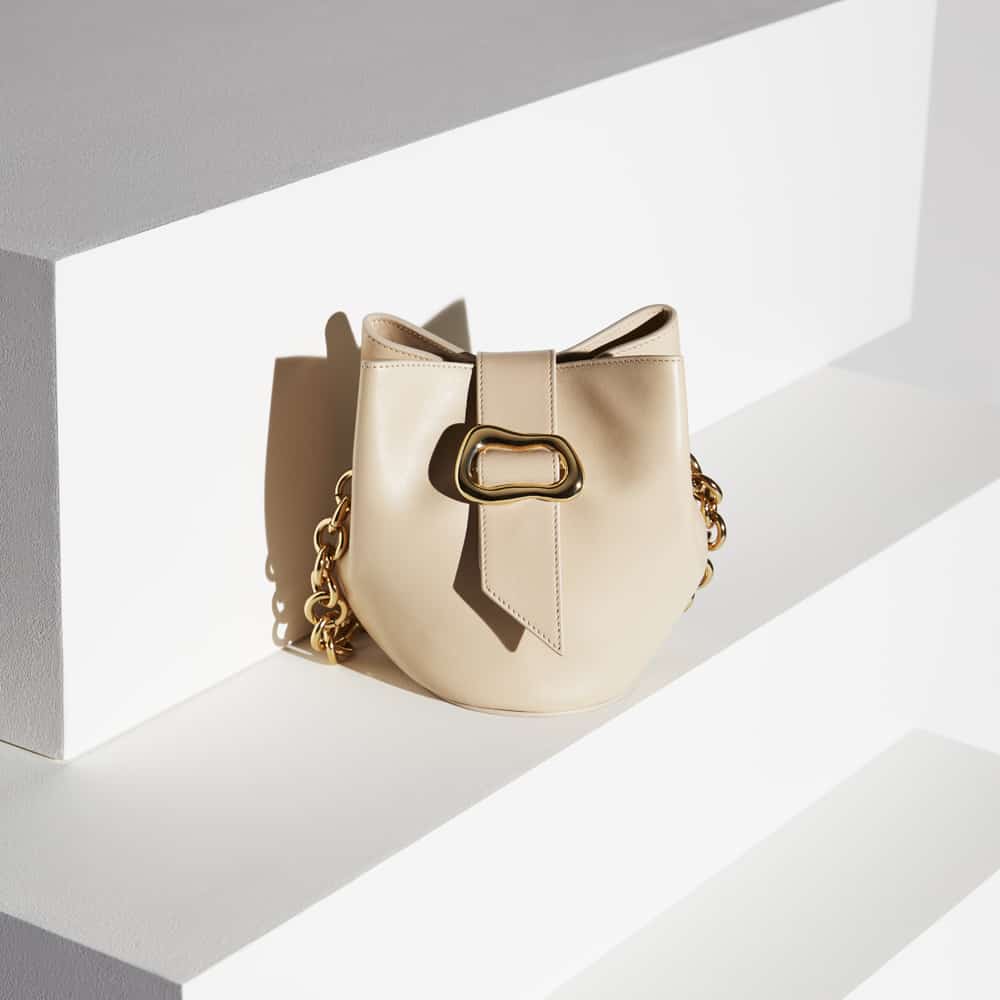 Why are you drawn to Harajuki youth culture? How did it work its way into the bags?
All of the girls have a unique sense of style, and are not defined by one specific trend. There are so many different subsets within Harajuku culture. There are girls that wear Gothic Lolita, which is kind of inspired by goth fashion in the U.S. There are also girls that wear more skater fashion — street style clothing inspired by A Bathing Ape and Japanese streetwear brands. It’s super diverse, and I wanted to incorporate the idea of defining your own unique style. I wanted to do bold colors inspired by neon lights and disco. It’s a collection that really describes my aesthetic: merging Japanese street culture and also New York’s more urban practicality, and the street style that exists here.

They seem quite ladylike for a disco/party inspiration!
I also wanted to make it an everyday collection that can be incorporated into the everyday woman’s wardrobe. For example, with the bucket bag you can remove the gold chain, and it comes with a leather strap that is a little bit more for the day. Versatility is very important to Adeam, and it’s something that I’ve been exploring for ready-to-wear. We do a lot of pieces that are more convertible.

Do you frequent nightclubs?
Not now, but I did grow up in the city. I went to college in the city, so I love this idea of music venues and being inspired through music for fashion. It’s always more exciting to have external references for fashion that’s not always self-referential. I’ve always been fascinated by the idea of nightclubs as a place where people of different walks of life and different styles come to together and create a new sense of fashion.

The Daily Issue 5 Is Here!