According To Elie Tahari, Forty Is The New Twenty 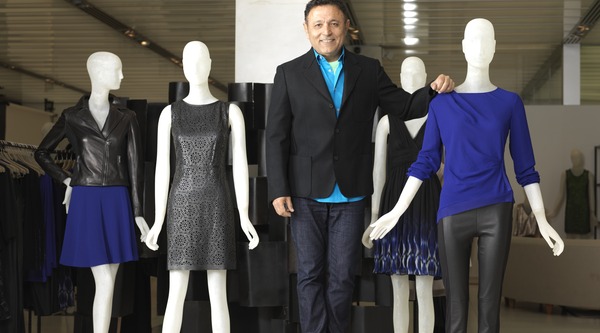 Happy 40th, Elie! How does it feel?
It feels like I’m finally graduating!

From what?
From the school of hard knocks!

What are your thoughts on “Elie Tahari Day”?
I don’t know what I did to deserve it, but I survived 40 years in the fashion business. My PR guy, Scott [Currie], probably had a lot to do with it. He tells me 40 is the new 20!

Did you ever imagine you’d receive such an honor?
No! I was astonished when I was told!

Joan Rivers was there with you. What’s your friendship like?
I think she’s very funny, very happy, and she likes to make people laugh. I like to make people beautiful, so we actually have a lot in common.

You’re a big supporter of Save The Garment Center, which also took part in the “Elie Tahari Day” festivities. What does that cause mean to you?
Simple: The industry gave me everything. It taught me English, it gave me bread, clothes, and knowledge. I am so appreciative of this industry and I want to give back. The Garment Center used to house the second-biggest industry in New York, after Wall Street, but we’re losing a lot of it to everywhere else in the world. The creativity is here, but the businesses are gone. It’s a shame.

What made you believe you could make it when you set out 40 years ago?
I don’t know how old you are, but I was younger than you! I started this brand when I was 20 years old. I moved to New York City, I didn’t speak English very well because I was an immigrant, and all I was trying to do was make a living and pay the rent. I didn’t think I would create a brand, or get my “Elie Tahari Day” or anything like that. It just proves that if you have a sincere intention in life and a good consciousness to do something good, life will beckon you. I always had intentions to do something good for something, and in the long run that’s what paid off.

Tell us about your special Edition 1974 collection.
Edition 1974 was just a name we picked to describe the pieces we are adding on to. But the entire collection isn’t just from 1974; it will feature styles that were created since that time.

Where is most of your collection designed?
It’s all done at 43rd Street and Fifth Avenue in a glass building, and I’m actually sitting on a terrace outside the studios now.

Why do you think young designers should return to New York to produce their lines here?
It’s economics! When I started out you could do everything in New York. You could manufacture here, and all the fabric was American. But that all disappeared. What happened was that people went overseas because it was a bigger economic advantage over there. When [Andrew Rosen and I] started Theory, it was small and we were capable of producing everything domestically because it was more advantageous. We didn’t have to pay duties on the fabric or the finished product, which is a big advantage. It works [to be in New York] if you’re small.

Who was the first celebrity to wear your designs?
My mother! No, Leah Rabin. Her husband was Yitzhak Rabin, the only prime minister of Israel who was ever assassinated. She was a very elegant lady—a Jackie O! I dressed her my entire career. She discovered me and we did a charity function for a hospital together, and as soon as she saw my clothes, from that day on, I dressed her. Leah was one of the first ones, then she introduced me to Hillary Clinton, who was also one of the first celebrities to wear my clothes. But I’ve also done Angelina Jolie, Beyoncé, and Emmy Rossum.

You’re doing some innovative stuff at your new Fifth Avenue store. Can you tell us about it?
We call it the laboratory store. The space was available downstairs from our design studios, and in one week we took all the furniture and racks from our warehouse and made a pop-up store. It’s an experimental store to see how to sell the clothing and style the collection. We’re going to shoot the customers when they come out of the dressing room! Of course, we’ll do their hair, their makeup, style them, and a professional photographer will shoot them. Then, they’ll get to keep the pictures. It’s an interactive photo studio, basically. Everything that happens in this store will affect the company.

When are you most productive?
When the sun sets.

Do you work late into the night?
Oh, sure. I’ll stay until midnight. After 9 p.m., when everyone leaves, I go through the fabric racks. It’s one of the most magical times I have here.

Do you ever get downtime?
When I sleep.

So diligent! Any vices?
I don’t drink, I smoke.

What would you do if you weren’t designing clothes?
I’d be an architect! I love creative things. What I want to do now is help make a change in the world. I want to help the world to be in love, not war. So I ask, “How can we exercise ‘love your neighbor as yourself’?” That’s the work I want to do when I grow up.