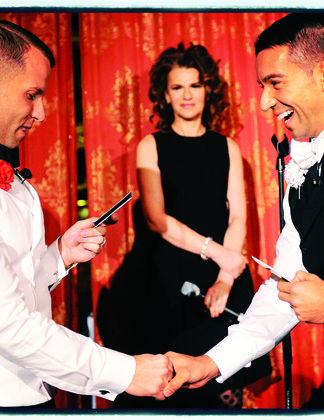 When Bank of America Merrill Lynch banker Georgi Balinov and Fab.com founder Bradford Shellhammer decided to tie the knot earlier this year, they enlisted comedian and actress Sandra Bernhard to make it official. She tells the The Daily about her latest cameo in the wedding world. BY EDDIE ROCHE

When did you start officiating weddings?
A very good friend of the boys is a mutual friend of mine. I ran into him on the street and he asked if I’d be interested in marrying a couple. I asked him what was in it for me, and he named the amount. I said, “Yeah! That sounds interesting to me!” They were incredibly generous and took care of all the details.

What were the details?
I had to be registered as a Universal Life Minister. That’s the kind of thing I would never deal with myself.

What does that entail?
Not much! You send in an application and $200. You don’t have to show up anywhere. They just send it in the mail. It was fabulous.

Did you get to know the grooms?
I met with them a few days before the wedding and interviewed them so I could write a nice piece that I delivered during the celebration.

Did they tell you why they wanted you to do it?
They were big fans of mine. They had other artists and performers like Andy Bell from Erasure at the wedding. They wanted an entertaining party wedding.

What did you say when you married them?
I took the highlights of their relationship and how they met and how it evolved and wove it into a funny performance piece. It was very heartfelt and emotional. I tried to make my part funny and upbeat. It wasn’t campy or snarky.

Did you stay for the whole night?
I didn’t. I think they thought I just wanted to do my thing and leave. They were being very respectful, but once I was there I thought I should have brought my girlfriend and stayed.

If you were contacted again to officiate a wedding, would you do it?
If it was a couple of the ilk of Bradford and Georgi, who had a classy event and respected me as an artist, I would do it again. It’s a nice way to make money and nice thing to do if people are real fans and want something special.

Any desire to get married yourself?
Not really. My girlfriend and I have been together for 14 and a half years. We’re a thousand percent committed and it’s all inter mingled, but neither one of us is the marrying kind, per se. For now I would say no, but that could change.

What do you think of all the progress in gay marriage?
Humor and cynicism aside, it’s obvious that it’s something that should be recognized federally and couples should have the same benefits and tax breaks. There’s no two ways about that. We’re headed in the right direction.

Have you heard of any gay divorces?
Everybody seems to be solid so far. We like to take things to extremes so I imagineit being a little more dramatic than the boring mundane straight situation. We always have to make it over the top and fabulous, whether it’s the wedding or the divorce.

When you go to weddings do you get down and dance?
Absolutely! It seems like these days that’s the only place you get to have a good dance session. There are no clubs anymore like in the Eighties and Nineties where you could dance for hours on end.

Would you do the chicken dance?
No. I like to do my groovy freestyle dance that I’ve been doing for my whole life. I’ve gotta give it a little bit of class.

Ha! So for the next few months you’re touring and doing a gig at Joe’s Pub on December 26.
I’ll be there through New Year’s Eve. It’s become a tradition. Every year I say I’m not going to do it, but people say, “Please, please!” And my daughter, who is 15, loves Christmas in New York. We don’t like to travel around that time of year. So, why not?

What’s the show?
It’s a combination of all the things I do. I have my band with me. I always try to do a year-end wrap up. Ultimately, it’s an intimate evening with 150 friends watching per show. It’s interactive!

We’ll try to come! Do let us know if you get married!
I will! I’ll keep you posted!