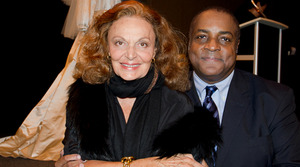 (NEW YORK) Stepping into the dark auditorium of Parson’s to celebrate the release of Rizzoli’s Perry Ellis: An American Original, somehow we felt like we were transported back to the Eighties. The dark room was dotted with nearly 70 Perry Ellis outfits, each of which was donated for the evening from their perspective owners, as there is no official archive for the brand. The pictorial tome, penned by Jeffrey Banks, Erica Lennard and Doria de la Chapelle was a celebration of the designer’s life, from start to sudden end in 1986 and was celebrated last night with help from the CFDA and Parsons the New School for Design.

Banks first met Ellis “over a backyard barbeque” and noted that he learned nothing new from penning the book, claiming “I really knew him!” The book’s title comes from Ellis’ original ideas: “He never looked to Europe, all his ideas came from inside him” explained Banks. The evening, which peers into the ten short years of Ellis’ career designing under his own label, brought the likes of Steven Kolb, Diane von Furstenberg, Isaac Mizrahi, Fern Mallis, Hamish Bowles and Ellis’ daughter Tyler Ellis. While chatting with Banks, we had to wonder, what was the relationship like between Ellis and Marc Jacobs? “When [Jacobs] was 16 years-old, he was working as a stock boy at Charivari and one day [Ellis] walked in. So [Jacobs] told him that he wanted to be a designer, just like him.” What was Ellis’ advice? “Go to Parson’s School of Design!” Shortly after, Jacobs enrolled, and the rest was history!