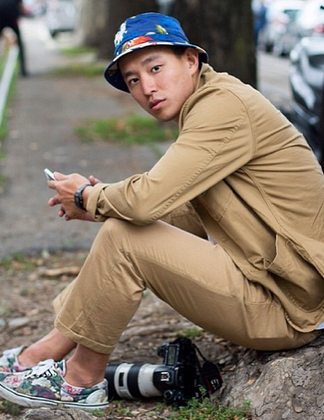 Korean photographer Nam can be found shooting glorious street style pics in Paris, Milan, New York, and London (take a peek at his blog STREETFSN for a sampling). We chatted up the affable shutterbug in the front row of Seoul Fashion Week for his take on Korea’s style quotient. Plus! The best mag from his home turf that should be worth the exorbitant international pricetag.

You snap photos at a lot of fashion weeks. What does Seoul bring to the mix?
Seoul Fashion Week is growing up, but it’s pretty different from the other cities.

How so?
Korean designers don’t really care about success. They just do what they like! New York, Paris, and Milan have set styles in each city. There’s no specific Korean look. It’s really about trying something new.

Interesting! So would you say that Korean duds are pretty edgy?
Japanese style is avant garde; Korean style is somewhere in the middle.

How do the shutterbugs here stack up to the photog scene in other cities?
Korean photographers are aggressive! It’s fun.